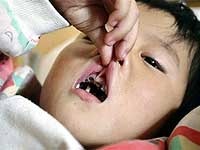 Residents of at least two regions in China’s poorer provinces of Gansu and Guangxi say they are being poisoned with lead and zinc waste being pumped into their water supply by local mining groups.

Jiang Wenjian, a resident of Guo’an village in Guangxi’s Teng county, told RFA’s Cantonese service that around 100,000 people were affected by the pollution of the river by nearby lead and zinc mines, which had a daily output of 20 tonnes.

“The government nowadays is 10 times worse than the Kuomintang ever was. They don’t care whether ordinary people live or die.” [Full Text]