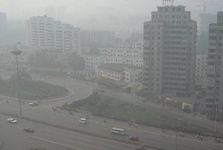 Beijing is the world’s worst city for air pollution. Sixteen of the world’s 20 most-polluted cities are in China, according to the World Bank. Satellite data from the European Space Agency reveals that Beijing and nearby northeastern provinces have the highest levels of nitrogen dioxide, causing respiratory problems and about 400,000 premature deaths per year. Pollutants in China’s sky have increased by 50 per cent in the past decade. Heavy industry, power plants and escalating numbers of car owners are to blame.

There’s another reason to be worried. Researchers in North America are very concerned about toxic pollution-particles drifting from China across the Pacific, and the fact that it will likely increase dramatically in the years to come. [Full Text]