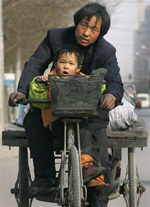 Some 2,000 people mobbed and ransacked a hospital in southwestern China on Friday in a dispute over medical fees and shoddy health care practices, a human rights group said today.

At least 10 people were injured when police broke up the demonstration at Guang’an (ÂπøÂÆâ) City No. 2 People’s Hospital, according to the Hong Kong-based Information Center for Human Rights and Democracy. The area was described as under tight police control today, with at least five people detained on suspicion of instigating a riot.

The unrest erupted after a 3-year-old boy died in the hospital, where he had been rushed for emergency treatment for ingesting pesticides. There were conflicting reports about how much medical care the boy received. [Full Text]