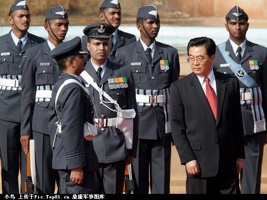 Jing-dong Yuan is research director of the East Asia non-proliferation program at the Center for Nonproliferation Studies and associate professor of international policy studies at the Monterey Institute of International Studies in California. He is the co-author of China and India: Cooperation or Conflict, 2003. Professor Yuan wrote on Asia Times on November 22, 2006:


A China-India-US strategic triangle has emerged in that policymakers are increasingly aware of and attentive to policies made in the other two capitals and how these may affect their own security interests. Within this complex structure, China is watching closely the significance and implications of a warming US-India relationship marked by growing defense ties and the nuclear deal. The US administration’s efforts to seek a closer relationship with India are seen by Beijing as using India as a counterweight against China’s rise.

A stable Sino-Indian relationship requires the effective management of the delicate China-India-Pakistan triangle. Beijing has made greater efforts to address New Delhi’s legitimate concerns over Chinese defense ties with Pakistan. While China’s neutrality during the 1999 Kargil crisis demonstrates a more balanced Chinese-South Asia policy, that gesture has yet to translate into goodwill and confidence on India’s part that the Sino-Pakistani relationship is not targeted at India. Indian security analysts have called Chinese policy an effort to engage India to contain it, citing, for instance, the Chinese role in helping Pakistan construct the Gwadar Port. [Full Text]

What India Thinks About China’s ‘One Belt, One Road’

On Modi’s Journey to the East, Economy Likely to Be Focus