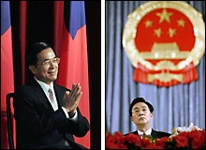 From The Christian Science Monitor: High-level criminal charges on both sides of the Taiwan Strait illustrate how the two countries manage corruption.

As recent corruption scandals have ensnared top politicians on both sides of the Taiwan Strait, the differences between democratically ruled Taiwan’s approach to corruption and mainland China’s have been on graphic display in “the tale of two Chens.”

In Taiwan, allegations in the media that President Chen Shui-Bian had misappropriated money from a special presidential fund led to huge protest demonstrations and an investigation by prosecutors that has seen the island’s first lady indicted for embezzlement.

But inside Beijing’s corridors of power, it is the fear of such public outcry and unrest that has driven official anti-graft campaigns. Rumors that Shanghai’s provincial Communist Party Secretary Chen Liangyu was mixed up in shady business were confirmed only after Party investigators sent from Beijing wound up their secret work last September, and Mr. Chen was summarily dismissed. [Full Text]