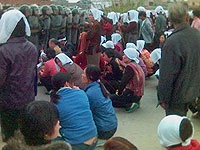 Approaching the first anniversary of the Dec. 6 Dongzhou shooting incident last winter, local police and officials have started patrolling and imposing an information blackout around the villages where a military crackdown occurred last year, according to Radio Free Asia.

Villagers say there will be some form(s) of mourning, such as roadside mourning. But they wouldn’t elaborate at this moment. One of the reasons is that villagers are cautious about the true identity of people who make phone call inquiries, as some local officials misrepresent themselves as reporters to fish for information.

Now authorities have taken over the entries into the villages and all vehicles entering will be checked. “There are at least two patrols every day at more than 20 villages,” a villager said. [Full Text in Chinese] (audio report, Chinese)

– China Sentences Dongzhou Villagers For Their Part in Clashes