Big Bucks to be Earmarked to Clean Up Songhua – Xinhua 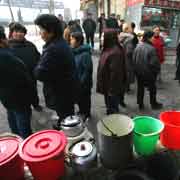 Beijing has ratified a proposal to clean up the water systems of Songhua River, involving key cities along the river such as Harbin (ÂìàÂ∞îÊª®), Qiqihar (ÈΩêÈΩêÂìàÂ∞î), Daqing (Â§ßÂ∫Ü), Jiamusi (‰Ω≥Êú®ÊñØ), Mudanjiang (Áâ°‰∏πÊ±ü), Changchun (ÈïøÊò•) and Jilin (ÂêâÊûó). The five year plan, from 2006-2010, will draw over 10 billion yuan into the megaproject that aims to ensure drinking water security and water quality along the China-Russia border.

HeilongjiangProvince will be taking 166 projects, with a total investment of 7.75 billion yuan; Jilin Province 102, worth 8.8 billion yuan.

Since late 2005’s headline making chemical spill in the river, Heilongjiang has, after a blanket inspection, registered 314 serious polluters, 39 of which have been closed. Provincial officials say the effort will continue this year.

Still, as Heilongjiang’s executive vice governor Li Zhanshu (Ê†óÊàò‰π¶) confessed, the environmental situation is still grave, with more than 80% of municipal sewage and over 100 major pollutant sources dumped into the river untreated. [Full Text, in Chinese]