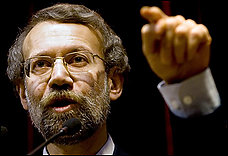 China on Friday urged Iran to give a “serious response” to a U.N. Security Council resolution that imposed sanctions on Tehran for refusing to suspend uranium enrichment.

Iran’s top nuclear envoy, however, warned that Tehran’s commitment to the peaceful use of nuclear technology will change if the country is threatened.

The negotiator, Ali Larijani, was in Beijing for a two-day visit and gave Chinese President Hu Jintao a letter from Iranian President Mahmoud Ahmadinejad. [Full Text]

Related report from the Washington Post: China Advises ‘Serious Response’ by Iran to U.N. Sanctions, which says”China’s public advice to Iran marked another instance in which Beijing seemed to be following a course parallel to that of the United States on nuclear nonproliferation. Diplomats from the two countries have worked with increasing closeness over the past three years in Chinese-sponsored negotiations to dismantle North Korea’s nuclear weapons program.”

(photo of Ali Larijani from AP)