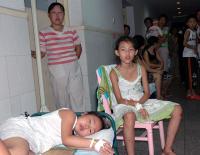 From the Epoch Times International:


“While China’s economy has been rapidly expanding, the country’s social welfare is declining fast. Two important factors contributing to this downfall are the noticeable spread of disease among Chinese people, combined with a neglect of public health concerns.”

“The latest issue of the British medical journal The Lancet features a report focusing on the spread of syphilis throughout China. A joint effort between Professor Myron Cohen, director of the University of North Carolina-Chapel Hill Center for Infectious Diseases, and the China National AIDS/STD Prevention and Control Center, the report explored the epidemic situation of sexually transmitted diseases among Chinese people from 1989 to 2005. Results revealed that in 1993 the reported total rate of cases of syphilis in China was 0.2 cases per 100,000 people, but by 2005 this number jumped to 5.7 cases. Chinese virology experts suggest that these figures may even be considerably underestimated.”

“But it isn’t just the spread of syphilis that is worrisome. A variety of diseases are seeing an alarming increase throughout China in recent years. The following health statistics come directly from China’s Ministry of Health and other institutional agencies.”
[Full Text]