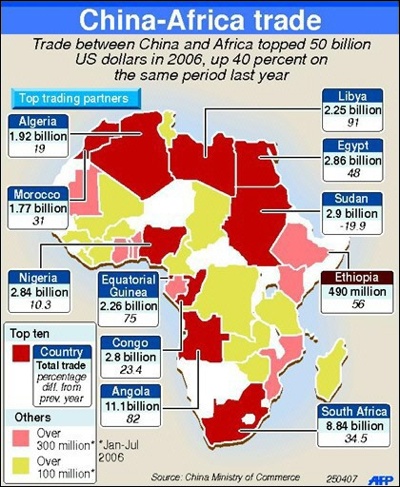 From AFP, via Yahoo! News:

An attack by rebels on a Chinese-run oil field in Ethiopia that left more than 70 dead is the latest example of the human and political cost oF China’s growing energy interests in Africa.

…… US actress and UNICEF goodwill ambassador Mia Farrow said last month that next year’s Olympic Games in Beijing would be known as the “Genocide Olympics” because of China’s support for Sudan’s government.

Her statement was one of the hardest-hitting in a campaign by human rights groups over China’s backing for the government in Khartoum, which is accused of allowing genocide in its western Darfur region.

Stratfor warned China of a continued backlash as it increases its economic, military and diplomatic interests in Africa.

“This surge in activity… has begun to strip Beijing of its immunity to accusations of imperialism,” the report said.

“Complaints have arisen that China is growing too ambitious and influential in domestic politics and too greedy in stripping Africa of its natural resources.”

Alan Baumler, one of the authors of an academic group blog Frog in a Well wrote:

There have been a number of complaints of late about China’s growing power in Africa, and in Ethiopia the Ogaden National Liberation Front has killed a number of Chinese oil workers to encourage China “to refrain from entering into agreements with the Ethiopian government.”

Jia has pointed out that China’s involvement in Africa is “normal business practice on the basis of equality and mutual benefit It is totally different from the plunder committed by colonialists in Africa.”This is pretty much the standard Chinese line. What imperialism is is always a complex question, but I was struck by how much the current Chinese leaders sould like Japanese leaders talking about Manchukuo in the 1930s. In the case of many of the Japanese they were being honest, meaning they actually believed the stuff they were peddling. I assume Jia Qinglin does as well.