Do The Media Have To Get Every Word Right? – ESWN blog 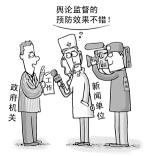 A translation of a Southern Metro Daily's opinion piece (Chinese) by Bi Shuzhi (ÊØï‰π¶‰πã), from EastSouthWestNorth blog (photo on media as a watchdog over government, via people.com.cn):

State Production Safety Supervision Administration director Li Yizhong said in an interview that there are no government departments or officials who are not monitored by the media. The media are not the central disciplinary committee, they are not the State Audit Bureau, they are not an investigative team and you cannot require that they be correct in every word that they say. As long as there are supporting facts, they deserve a high degree of attention (People's Daily, April 9).

But, then there are the dirty little secrets of other rough government folks:

You just reported yesterday that the traffic police officers were arbitrarily issuing fines, and you have another report today. This make it look like there are no good people left in our system. Are you deliberately looking for trouble?

Our Safety Supervisory Department took action as soon as you exposed the mining disaster. How can you say that we did nothing before this? [Full Text]