Eye witness of the accident blogged,” no remains of human bodies can be seen. All melted into the cool steel — a piece of 70 square meters iron pancake.” More from Reuters:

China has detained four people after a horrific accident in which more than 25 metric tons of molten steel engulfed a room where workers were changing shift, killing at least 32, state media said on Thursday.

An industrial ladle was moving into the pouring position at the plant in the northeastern province of Liaoning when it sheared off an iron rail, spewing out its 1,500 degrees Celsius (2,730 F) contents…

Like many state-owned enterprises in the northeastern industrial rust belt, Qinghe has been restructured into a private company, with about 300 workers, as China struggles to meet demand for steel from its booming economy.
[Full Text]

Read the Chinese report and see the diagram from New Express. 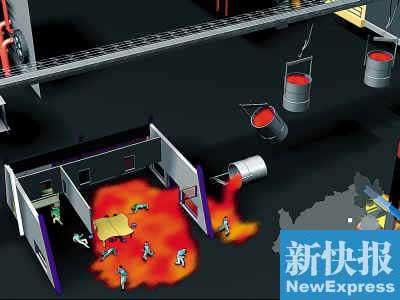