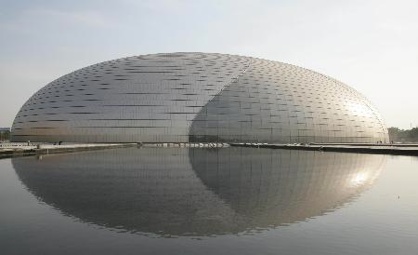 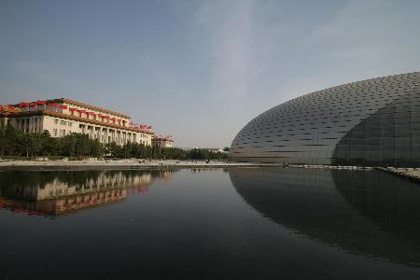 From China in Transition blog:

The newly constructed reflection pool surrounding the unfinished National Grand Theater of China did not turn around the disapproval attitude of the public toward the long-time controversial project, despite the apparent beauty added to the scene by the water.

Most of the over 700 online comments still hold a negative tone toward the construction, calling it too lavish, a ill-match with the Great Hall of the People standing beside, a waste of money and water.

“The water should be placed in the impoverished wild north west. It is too poor there,” one comment reads.

“Is it necessary to do something so extravagant?” questions another. “[The government itself] is still advocating frugality.”

There are also a few comments saying that the building is pretty and a testimony of China’s advance in architecture. [Full Text]