The Class Problems With Ads That Got None

Do gaudy ads for luxury villas and sedans really threaten social harmony...or just Party politicians' images? A couple of marketing peccadillos in Beijing and Shandong have aroused skepticism in the media over what's really at stake.

"Be a foreigner's landlord!" crowed one advertisement in Chinese only for buyers to invest in a new apartment block in a Beijing development

...Chinese President Hu Jintao has made "social harmony" a keynote of his government, and as he prepares for a Communist Party congress later this year that is likely to elevate his ideas, there are few areas of life that escape its sway including glitzy ads.

Indeed the political motivations of the crackdown appear almost as naked as the ads themselves. The announcement came just as the city convened its five-yearly Communist Party congress. One week earlier, at seminar on ad management convened by the city CPPCC, Mayor Wang Qishan vilified ads for luxury items for aggravating differences between the classes and the masses. "Some people wish they could carve the word "rich" (Èòî) right on their faces," he quipped.

The domestic press, unsurprisingly, does not seem nearly as upset as Beijing officials are about this warped trend in marketing, which is well over decade old. [UPDATE: See Danwei's post on the topic, which includes translations of several esteemed commentators who ridicule the crackdown for its pretensions].

Even straightforward news reports treat this latest anti-insurgency against "spiritual pollution" with a hint of campy irony. The quasi-official China News Service concluded:

Wang Qishan's speech earned strong approval on the streets, and no shortage of commentaries have asserted that advertisements flaunting wealth stab the capital with pain and will lead to psychological imbalance in society. However, there are also people who believe that what really stabs people with pain is irreducibly high housing prices.

In the China Daily on Saturday, Op-ed writer Raymond Zhou expanded on that point. He deems the crackdown misdirected and unlikely to make much of a difference:

The poor may already be numb [to such ads], or they would have been driven crazy. The segment of society that is really distressed may be the middle class, including young professionals, who see themselves as economically enslaved for a lifetime to real estate developers.

The issue is not simply a poor versus rich dichotomy. From the perspective of freedom of expression, I don't think advertising slogans should be regulated. They are designed to hook, stimulate, and provoke. If ad copy, especially the tagline, reads like a government document, the ad agency would probably be fired.

...In the 1990s, a southern city outlawed the use of "president" and "imperial" in property names. That did not dent the craving for showing off wealth. Banning the current batch of ostentatious adjectives would not achieve the desired effect either. If anything, a new regulation of this nature may only make the advertisers less reliant on clichs [sic] and make them more imaginative in terms of how they express themselves.

Basically this is a question of taste. In a mature society displaying wealth is generally considered bad taste. But for those who have just shaken off the shackles of poverty, there is a constant need for reaffirmation as if one wakes up from a bad dream and does not stop biting his fingers.

Meanwhile on Friday, far from the dronings in the capital, genuinely fresh class conflict was brewing in Shandong province over ostentatious advertising of whole different order: 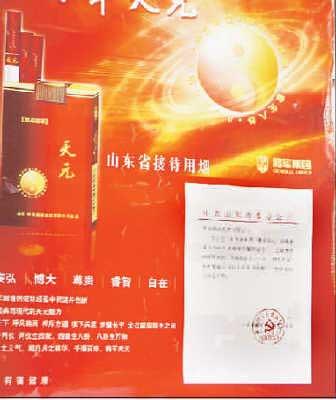 In tobacco shops around the provincial capital of Jinan, customers there noticed, new ad posters (pictured) billed an upstart local cigarette brand called Jiangjun Tianyuan (Â∞ÜÂÜõÂ§©ÂÖÉ) - priced at 500 yuan a carton - the official smokes of provincial government receptions. And just to prove it, Tianyuan's ad pictured a "red letter-headed circular" (Á∫¢Â§¥Êñá‰ª∂) confirming the official designation. The letter is stamped with the seal of the Office of the Shandong Province Communist Party Committee. It takes up a full quarter of the poster.

Article Seven of China's advertising law makes it illegal to invoke the names of government organs or their staff, note the Economic Information Daily (ÁªèÊµéÂèÇËÄÉÊä•) and the Oriental Morning Post (‰∏úÊñπÊó©Êä•), which ran the earliest reports of this case. Still, say experts they quote, it remains common practice for local governments to abuse their powers by sponsoring local state brands of cigarettes and alcohol in this way.

No one they interview is quite sure how the letter showed up in the ad.

The Xinhua-owned Information Daily, which first broke the news, rings up the firm in charge of Tianyuan and gets this response from the person at the duty office who answers the phone: "Isn't there something wrong with that? How can you make such an advisement? The problem with this ad is even more serious than 'Nanjing's [government] bureau-grade comfort' [ad]" (Âçó‰∫¨ÁöÑÂ±ÄÁ∫ß‰∫´Âèó). He is referring to promo text for locally made cigarettes at the Nanjing airport last year that also touched off a controversy.

Shanghai's Morning Post speaks to someone by the surname of Xia at the provincial party committee office (Â±±‰∏úÁúÅÂßîÂäûÂÖ¨ÂéÖ): "Impossible," the man replies. When the reporter fills him in on the details, he says he has to consult with his superiors before commenting further.

From unspecified sources within Jiangjun Tianyuan, the Post's reporter learns from that the cigarette maker gained the province's patronage back in June, 2005, just after it introduced its product. Tianyuans were smoked at a Shandong enterprise forum, the province-wide people's congress, and other party meetings and received "the highest appraisal". The circular, the Post reporter is told, "amply demonstrates provincial party committee leaders' support for the Shandong pillar enterprise Jiangjun Group."

UPDATE: For some strange reason, a search for this story reveals links to it on several major portals are now broken. These include: Sina, Tom.com, Sohu, and Netease.