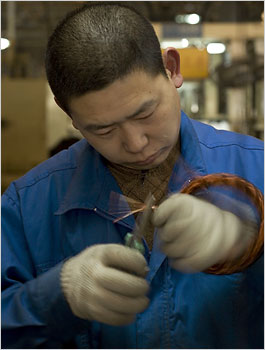 Zhao Qingjie’s favorite book, he says, is a Chinese translation of the autobiography of Lee Iacocca , the celebrated American carmaking executive.

Zhao, who runs one of China’s largest manufacturers of automotive starters and alternators, has long been interested in the United States. That should make his counterparts in the auto parts industry elsewhere very nervous.

“Entering the U.S. market is one of our key strategies,” said Zhao, whose company, Wonder Auto Technology , has obtained a Wall Street stock listing and is preparing to start exporting.

China’s auto parts exports have increased more than sixfold in the past five years, nearly topping $1 billion in April and emerging as one of the fastest-growing categories of Chinese industrial products sold overseas. More than half of these auto parts go to the United States; most of the rest go to Europe and Japan. [Full Text]