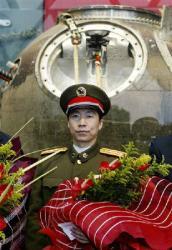 From Reuters via Yahoo.com:

China, which is launching a lunar exploration programme this year, revealed on Monday how close the country’s first astronaut came to death on his return to Earth.

China became only the third country to put a man in space after the former Soviet Union and the United States when Yang Liwei orbited the Earth in 2003 in what was a resounding success for its space programme. But Xinhua news agency said this was almost not so, quoting the Xian Satellite Monitor and Control Centre’s report on the dangers met by the Shenzhou V rocket. [Full Text]