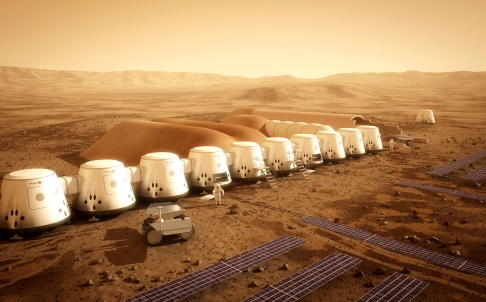 Two mainland Chinese citizens are among the top 100 candidates shortlisted for the Mars One project, an ambitious plan devised by a Dutch entrepreneur to form a permanent human colony on Mars. Nectar Gan at South China Morning Post reports:

Lin Xiaoxia and Li Dapeng are among 100 candidates shortlisted for Dutch entrepreneur Bas Lansdorp’s Mars One project, which aims to send 24 people to set up a permanent colony on the Red Planet from 2024.

They made the shortlist last week after making statements of good health and participating in online interviews. They will now take part in group challenges before the final list is announced by the end of the year.

“It came as a total surprise, because the online interview did not go smoothly due to a bad connection,” Lin, 31, a sales coordinator for a garment business in Guangzhou, said in an exclusive interview with the South China Morning Post. “I was so thrilled by the news I couldn’t fall asleep at night. I kept imagining the scene when I land on Mars.”

[…] The other mainlander, Li, is a 33-year-old father who has been in love with astronomy since his teenage years. He told the Post that the “possibility of completing the project is relatively low”, but this would not prevent him from taking part “whole-heartedly”. [Source]

Nobel laureate and Mars One project ambassador Gerard’t Hooft has suggested that the plan’s timetable and cost estimates are wildly optimistic, The Guardian reported on Monday: 100 years, he believes, is a more realistic timeframe than ten. After researchers assessed the proposals last year, MIT astronautics professor Olivier de Weck commented that “we’re not saying, black and white, Mars One is infeasible. But we do think it’s not really feasible under the assumptions they’ve made.”