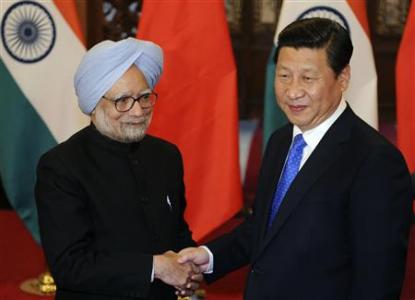 The border defense cooperation agreement is built on existing confidence-building measures and is designed to ensure that patrolling along the Line of Actual Control, as the unsettled border is called, does not escalate into an unintended skirmish, an Indian official said last week.

[…] Under the new deal, the two sides will give notice of patrols along the ill-defined border to ensure that patrols do not “tail” each other to reduce the chance of confrontation and will exercise “maximum self-restraint” should the two sides come face to face in areas where the line of control is unclear.

The two armies, strung out along the 4,000-km (2,500-mile) border from the high-altitude Ladakh plateau in the west to the forests of Arunachal Pradesh in the east, have also agreed to look at setting up a hotline between top-ranking officers in addition to existing brigade-level contacts.

The border defense cooperation pact is a small step forward in a complicated relationship marked by booming economic ties and growing distrust. [Source]

The Hindu records comments from Prime Minister Singh and Premier Li on the BDCA, noting it was one of nine bilateral agreements signed today in Beijing:

The BDCA was among nine agreements signed by both sides, of which an MoU on Strengthening Co-operation on Trans-border Rivers was another significant agreement, officials said.

In a statement to the media, Premier Li said the BDCA “would help maintain peace and tranquillity in the border areas.”

The Chinese leader said he and Dr. Singh agreed that “ the two governments have the ability to manage differences along the border so that it won’t affect overall interests of our bilateral relations.”

Dr. Singh said the BDCA would “add to the existing instruments to ensure peace, stability and predictability” on the borders.

“We agreed that peace and tranquillity on our borders must be the foundation for growth in the India-China relationship, even as we move forward the negotiations towards a fair, reasonable and mutually acceptable settlement to the India-China boundary question. This will be our strategic benchmark,” Dr. Singh said. [Source]

Visa liberalization was also expected to be on the table in Beijing, but after China refused to allow Indian athletes from disputed Arunachel Pradesh to enter China after issuing them stapled visas earlier this month, that seems to have been put on hold. Further coverage from The Hindu notes that Dr. Singh is receiving red carpet treatment while in Beijing: the Chinese military band serenaded the Indian prime minister with familiar tunes, and former premier Wen Jiabao even came out to play host—a rare occurrence.

With Prime Minister Singh in China, Indian Minister of External Affairs Salman Khurshid was visiting the Philippines yesterday. Beijing and Manila are also embattled in a territorial dispute, and Khurshid emphasized India’s intent to stay out of it in an interview with the South China Morning Post:

The territorial dispute between Manila and Beijing is a bilateral issue in which New Delhi will not interfere, Indian external affairs minister Salman Khurshid told the South China Morning Post.

[…] The apparent tag-team diplomacy by Singh and Khurshid appears to show India’s intent to play both sides – while staying neutral in China’s disputes with other countries. India has grown more reliant on China over the past decade, with two-way trade growing to US$66 billion last year. It also wants to boost its influence in Southeast Asia, where China is making greater inroads.

“It is a coincidence that [Singh] is in China and I’m here,” Khurshid told thePost.

During an open forum yesterday following his lecture on India’s foreign policy where he emphasised India’s “look east policy,” Khurshid said there had never been an occasion where China told India to stay out of the South China Sea. “Because we don’t interfere,” he said. [Source]

While new measures may help to cool Sino-Indian tension on the ground, the BBC reports that India’s plans to put a spacecraft in orbit around Mars may “stoke the fires of a burgeoning Asian space race”:

The Indian Space Research Organisation (ISRO) is making its final preparations to send an orbiter to the Red Planet.

[…] The Mangalyaan probe was to have been launched as early as 28 October, but rough weather in the Pacific forced officials to delay the launch by a week. The unmanned mission has a launch window lasting until 19 November.

[…] According to Pallava Bagla, science editor of New Delhi television news and author of a book about India’s space efforts, Destination Moon, the country’s public are especially excited about the possibility of beating China to the Red Planet.

“If India does beat China to Mars you can imagine the national pride,” he told BBC News. [Source]