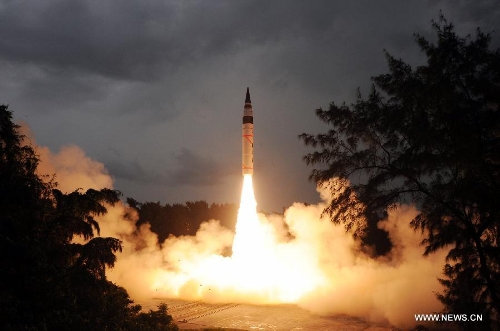 India is trying to keep up with China’s growing military strength and wants to have a viable deterrent against its larger nuclear-armed neighbour.

The two countries have generally warm relations, but they fought a brief Himalayan war in 1962 and a build up of conventional defences along their disputed border is a source of tension.

The Agni-V is the most advanced version of the indigenously built Agni, or Fire, series, part of a programme that started in the 1960s. Earlier versions could reach old rival Pakistan and western China. [Source]

The missile’s first test took place in April last year. After Sunday’s test, the Lowy Institute’s Rory Medcalf referred Twitter followers to his and Fiona Cunningham’s 2011 assessment, which argued that though there was “no nuclear ‘arms race’ between China and India,” better communication between the two sides was needed.

The risk of nuclear confrontation between China and India is widely considered to be low, even though New Delhi cites China as a reason for its nuclear weapons and part of Beijing’s arsenal is intended to deter India. This benign assessment needs to be revisited as the power and interests of Asia’s rising giants expand and the potential grows for them to clash. China’s unwillingness to recognise any Indian right to possess nuclear weapons is becoming unsustainable. So are assumptions that the two nations are in a state of stable, mutual deterrence. In fact, asymmetric capabilities and perceptions could prove destabilising. Denial of a problem is part of the problem. [Source]