Last week, as India’s daily count of new COVID-19 cases had been over 300,000 (at least) for more than a week, Xi Jinping offered a gesture of goodwill despite abiding economic and diplomatic rivalries between the two nations. Chinese state media reported that in a personal message to Prime Minister Narendra Modi, Xi expressed his concern and desire to offer additional assistance: “Mankind is a community of common destiny sharing weal and woe and only through unity and cooperation can the nations of the world ultimately overcome the pandemic.” Xi also offered his optimism that under New Delhi’s leadership “the people of India will certainly overcome the pandemic.”

However, not everyone in the Party appeared to have embraced the message of compassionate neighborly outreach voiced by its “core leader.” On May 1, the day after Xi’s personal message to Modi—and as India’s official daily COVID-19 case count was breaking 400,000—the CCP Central Political and Legal Affairs Commission, China’s top law enforcement authority, posted a brutal comparison on Weibo. The post compared a photo of the mass funeral pyres reportedly being used in New Delhi as crematoriums are overwhelmed to that of the unmanned module for China’s Tianhe space station that was successfully launched last week. The post sparked an immediate backlash both in China and abroad.

CDT has translated an essay by WeChat public account @十分正经研究所 further describing the offending post in the context of a recent wave of angry online nationalism and a belligerent “wolf warrior” style of official diplomacy. The essay castigates the official account for the comparison, and offers an apology to the people of India. The essay has since been deleted, while CDT Chinese editors note that more recent posts critiquing the official post have remained online.

An Apology to the People of India

“China Peace Net,” the online presence of the Central Political and Legal Affairs Commission, posted to Weibo at 1:24 p.m. today.

The post said “ignition in China vs. ignition in India, #400ThousandNewCasesIn1DayInIndia#.” Below the text were two photos: one of China launching a rocket, the other of healthcare workers in India building funeral pyres for the latest victims of COVID-19. 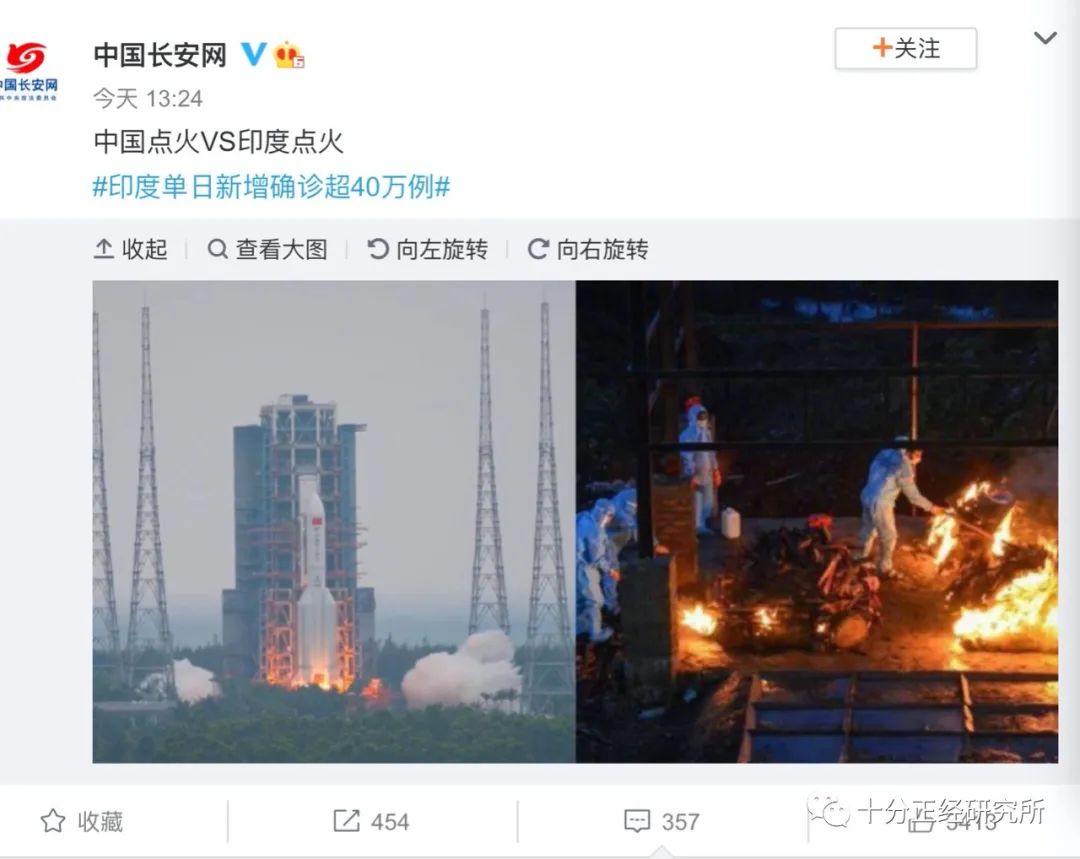 “China Peace Net” did not invent this. Virtually the same Weibo post is all over social media: “China lights a fire, India lights a fire, both are sending people up to heaven.” You can’t blame them for their mockery. After all, there are as many value systems as there are people. You can’t demand that everyone think the same, that everyone be equally empathetic to the victims of the pandemic.

Every single victim of the pandemic had a full and vibrant life, and each is worthy of respect. When COVID first hit Wuhan and the city was short on medical equipment, in that hopeless moment when patients couldn’t be saved in time, other countries reached out to China. Japan said, “We are in different lands, but we share the same sky,” touching countless Chinese people. As India is being ravaged by COVID, the most basic sympathy for those suffering as we did is fundamentally human—it has nothing to do with patriotism, it is basic decency.

The pandemic isn’t a competition. “Winning or losing” both stand on enormous individual sacrifice. China’s success at quelling the pandemic came through strict management and control, social lockdown, coordination among the masses, economic backsliding, and international aid. Every individual, and society as a whole, paid a heavy price.

No man is an island. The pandemic is raging, the virus is mutating, it could come back at us any time. We can’t pat ourselves on the back for our one-time victory, or rub in our success with such cruel mockery.

Yesterday, April 30, President Xi Jinping sent a message of sympathy to Indian Prime Minister Narendra Modi on behalf of the Chinese government and the Chinese people, and personally offered his condolences to the Indian government and people.

President Xi said that humanity is a community of shared destiny, and that only when the world stands united will we defeat COVID once and for all; that China wants to cooperate further with India in the fight against the pandemic, and to offer support and aid; and that he believes that, under the leadership of the Indian government, the Indian people will defeat COVID.

With yesterday’s message still ringing in our ears, today an official Weibo account has placed itself outside of this “community,” ruthlessly taunting another country. It’s hard to understand.

As the ancients said, “When there are mourning rites in his neighborhood, one should not accompany his pestle with his voice. When there is a body shrouded and coffined in his village, one should not sing in the lanes.” Our technology and civilization are far more advanced, but why on this point are we more primitive than the ancients?

Some people will say, “You’re not Chinese, you’re a traitor.” Excuse me, I am Chinese. I hope that every Chinese person will be humane and courteous, have a sense of shame and know the difference between right and wrong. Even as we bitterly fight with our opponents, even as we encounter unjust treatment, we can still hold fast to these most basic threads of human decency.

I would like here to personally apologize to the Indian people. China Peace Net’s Weibo post does not represent me. We share the same planet. Differences of culture and national conditions have caused the pandemic to spread in your country. We are suffering along with you.

While we have our territorial disputes, today COVID is our common enemy. We are with you. We hope you are able to control the virus soon and return to everyday life. [Chinese]

A report from the Hindustan Times notes that their attempt to obtain comment from China’s foreign ministry yielded the disingenuous note “we currently cannot find it on the relevant Weibo account,” and directed the paper toward official messaging: “It is hoped that the Indian side will pay attention to the Chinese government and mainstream public opinion supporting India’s stance in fighting the epidemic.”

As Manya Koetse notes at What’s on Weibo, @十分正经研究所 wasn’t the only Chinese web user disgusted by the official post.

A popular legal account with over 390.000 followers (@王鹏律师) posted: “Such an inappropriate comparison, show some respect for life. Every country encounters disasters! Not to mention that in times of [this] pandemic, every country is involved.”

“I don’t know what is wrong with the online editor of China Chang’an today, from the propaganda point of view this is a classic case of propaganda failure,” one Weibo commenter said.

“This is so inappropriate for an official account,” others wrote.

“That post gave me chills. I know some people have a very low bottom line, but I could’ve never expected it would be so low, so low that they can openly sneer at the passing of life, so low that they are devoid of conscience and proud of it,” another blogger wrote. “It’s inhumane,” others said. [Source]

The Hindustan Times’ coverage notes that China’s official media has a record of mocking India at times of diplomatic tension:

During the Doklam standoff near the Sikkim border in 2017, news agency Xinhua had released a video with racist overtones that had mocked and parodied Indians.

The video in English ran a little more than three minutes and was titled “7 Sins of India: It’s time for India to confess its seven sins”.

It featured a man with a turban and a fake beard – an apparent attempt at mocking at an Indian Sikh person – speaking in English in the way in which Indians are perceived to speak the language. [Source]