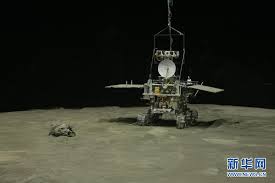 China’s Jade Rabbit lunar rover is in trouble after experiencing mechanical difficulties, according to state media. From BBC News:

The malfunction emerged before the rover entered its scheduled dormancy period on Saturday, Xinhua reported, citing the State Administration of Science, Technology and Industry for National Defence (SASTIND).

The rover was due to become dormant for 14 days during the lunar night, when there would be no sunlight to power the rover’s solar panel, reports said.

The Jade Rabbit landed on the moon in December as part of China’s Chang’e-3 mission, its first “soft landing” on the moon and the first by any country since 1976. Chinese social media users expressed their grief on Monday for the Jade Rabbit’s misfortune, as the Sydney Morning Herald reports that “Jade Rabbit lunar rover” was one of the most-searched terms on Sina Weibo. State-run Xinhua News also published a report in which the moon rover said its goodbyes. From CNN:

“Although I should’ve gone to bed this morning, my masters discovered something abnormal with my mechanical control system,” said the Xinhua report, in the voice of the Jade Rabbit. “My masters are staying up all night working for a solution. I heard their eyes are looking more like my red rabbit eyes.”

“Nevertheless, I’m aware that I might not survive this lunar night,” it added. [Source]