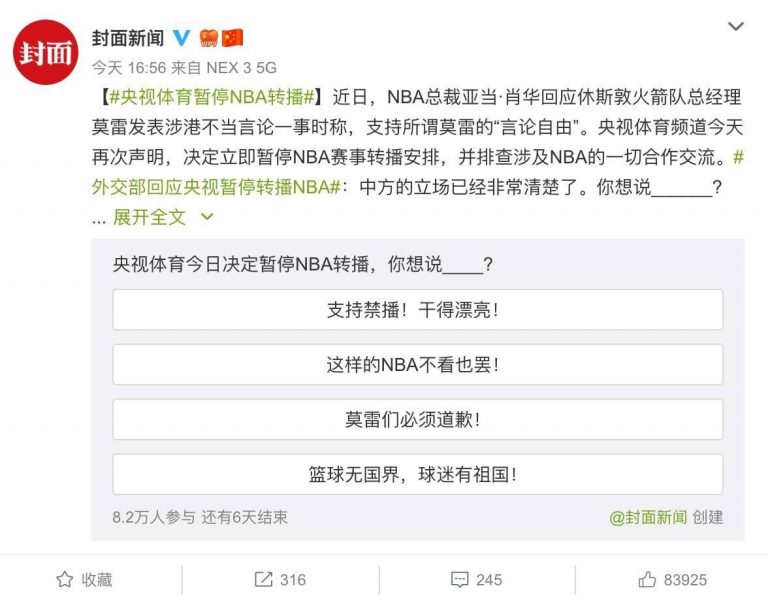 On October 8, Cover News launched a survey questionnaire on Weibo asking for readers’ take on CCTV Sports’ decision to suspend its NBA broadcast following the Houston Rockets controversy. The questionnaire concluded that the Chinese position on the issue is very clear and asked readers to pick one of the following four choices to express their view: 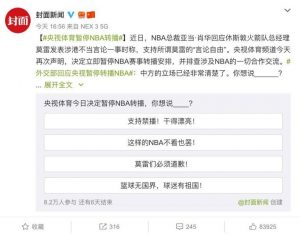 Netizens have ridiculed the survey, saying that there is in fact only one choice and that is to select all of the options, since this country does not need a second voice.

On the same day, the People’s Daily also posted an identical survey with a similar selection of answers:

[I’m fine with not watching this kind of NBA!] Recently, Daryl Morey angered fans with his Hong Kong comments. On the afternoon of October 8th, CCTV Sports announced its decision to suspend the NBA broadcasts. How do you view Morey’s blunder?

The following is a selection of netizen comments posted on Weibo and collected by CDT Chinese editors in response to the survey questionnaires:

@Yīgèyěbùnéngyòng: Are there no other options?

@Suchres: I have been represented against my will and so I cannot express my own views. This time it’s the NBA, next time it will be Disney, Apple, Premier League, Uniqlo, Nintendo, Sony… The final scene of the Cold War is coming.

@Yúhuāngdàn: ??? Don’t these options all express the same view?

@Kuàichība666: It appears like a lot of options but there is really only one option, select all.

@Dongdongs6_592_881: Did the government allow you to speak? Shut up or else get out of China

@Dìngnàozhōng: Is this about spotting the difference?

@Zhuānduìnǎoziyǒukēngdegāngjīng: What does the NBA matter when you’ve been through days when even QvodPlayer is gone.

@outXiǎoxióngyǔzhòufēngkuáng: This country does not need a second voice

@Huǒxīngchéngbùyī: Given so many options, the question is: are you fully supportive? Or… do you refuse to support?

@NiúròugānTerminator: Is there a 5th option? [Chinese]

Changhong Electric isn’t just taking their Houston Rockets-branded mini fridges off the shelves, they’re actually recalling them. Everyone has to send their refrigerators back to Sichuan now, because this how a normal country reacts to a deleted tweet in 2019. pic.twitter.com/yv8t4FBOeu