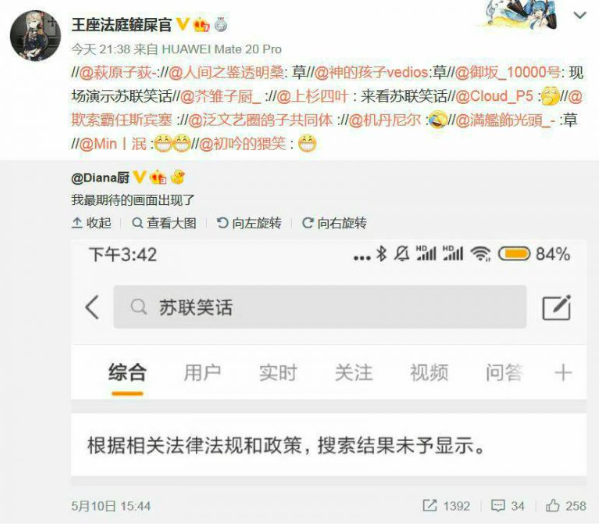 Late last week, a Weibo user broke the news that searches for the term Soviet joke (苏联笑话) are now censored on the microblogging site, with queries yielding the statement “search results are not displayed according to relevant laws, regulations, and policies.” CDT Chinese editors conducted a search test on May 16th confirming that the term has indeed been blocked on Sina Weibo.

The term is likely censored due to the historical context surrounding the rise of political humor in the former Soviet Union and its association with current political conditions in China. In the USSR, political humor allowed individuals to express their dissatisfaction clandestinely in an environment where speech was strictly controlled. This trend that can also be seen in the covert, humorous, and highly creative lexicon that Chinese netizens have developed to comment on and mock politics.

Because humor can be understood as a form of quiet protest, these jokes were officially forbidden and told at some risk to the individuals doing the telling–in the former Soviet Union, the telling of a political joke could in the worst case scenario yield a ten year prison sentence for “anti-Soviet agitation” under Article 58 of the criminal code. In modern China, we have seen netizens placed in criminal detention for publicly spreading political jokes online. In 2017, for example, a netizen was jailed for 22 months for “picking quarrels and provoking troubles” after mocking President Xi Jinping with the widely-used nickname “Steamed Bun Xi.”