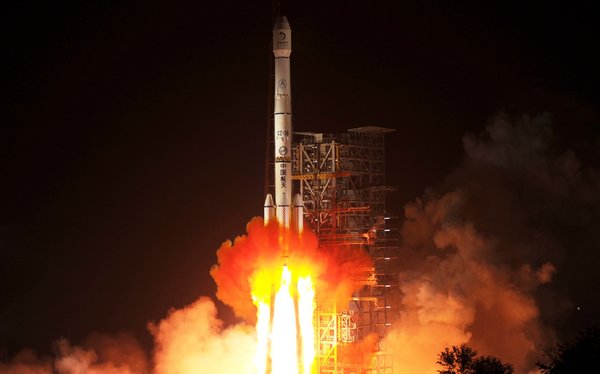 China has launched its first lunar rover, in an attempt to make the first soft landing on the moon since 1976. From the New York Times:

If successful, the Chang’e-3 mission will be China’s first “soft landing” on the moon — which allows a craft to operate after descending — and the first such landing by any country since 1976, when the Soviet Union sent a probe. The United States is the other country that has mastered soft lunar landings, and the last American expedition on the moon’s surface was a manned visit in 1972. Chinese state-run television broadcast footage of the rocket’s untroubled launch and ascent into space, where the Chang’e-3 craft set off toward the moon.

For China’s Communist Party under President Xi Jinping, such feats embody his rallying cry of a “Chinese dream” of patriotic unity under one-party rule, supported by technological advances and rising international stature.

“If it’s all successful, it will certainly indicate that they have really come up the learning curve in terms of technology,” said Joan Johnson-Freese, a professor of national security affairs at the United States Naval War College in Rhode Island who researches China’s space activities. Professor Johnson-Freese emphasized that she was giving her own views.

“China’s getting a lot of prestige, which turns into geostrategic influence, from the fact that they are the third country to have manned spaceflight capabilities, that they are going to the moon,” she said. [Source]

An article on space.com explains the planned journey for the rover:

In a CCTV.com interview, Ouyang Ziyuan, a senior advisor of China’s lunar probe project, said the lander will hover above the moon at about 330 feet (100 meters).

“Then using special cameras it will look for a flat place to land on. Then when it’s about 4 meters above ground, its engine will stop,” Ouyang said. “The lander’s four legs are shockproof and will ensure a soft landing.”

Chang’e 3 deployed its landing legs shortly after separating from its Long March 3B rocket.

The lander will start work immediately after landing on the moon by observing space using an optical telescope, Ouyang said. [Source]

The Chinese government has focused on building up their space program in recent years, with manned space flights and an attempt to build its first working space station. The BBC explains the significance of the current rover mission for China’s space aspirations, with another interview with Professor Ouyang:

He explained that there were three motivations behind the drive to investigate the Moon.

“First, to develop our technology because lunar exploration requires many types of technology, including communications, computers, all kinds of IT skills and the use of different kinds of materials. This is the key reason,” he told BBC News.

“Second, in terms of the science, besides Earth we also need to know our brothers and sisters like the Moon, its origin and evolution and then from that we can know about our Earth.

“Third, in terms of the talents, China needs its own intellectual team who can explore the whole lunar and solar system – that is also our main purpose.” [Source]

China’s lunar probe is part of a coordinated effort to put a person on the moon in 15 years, the Independent reports:

While the United States scales back its grand ideals of re-conquering the Moon, China is forging ahead with a bold three-step programme beginning with the robotic exploration of possible landing sites for the first Chinese astronauts to set foot on lunar soil between 2025 and 2030.

“This launch fits in perfectly with China’s logical development of its capabilities in space,” said science writer and astrophysicist David Whitehouse, author of The Moon – A Biography.

“It is sending astronauts into space to do more complicated things each mission, and each Moon probe builds on the last. They plan to bring them together and it’s very possible the next person to walk on the Moon could be Chinese in 15 years’ time,” Dr Whitehouse said. [Source]