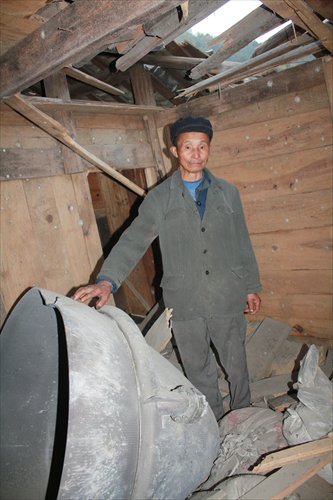 As China’s Jade Rabbit rover heads on its two-week flight to the moon, parts of the rocket that launched it landed closer to home after a much shorter trip. From Austin Ramzy at Sinosphere:

Early Monday, minutes after China launched a rocket carrying the country’s first lunar rover, a farmer named Yang Weihan heard a rumbling sound and then a huge crash. He grabbed a flashlight and walked to his barn, where he found an open door and a massive hole in the roof, he told the Hunan-based Xiaoxiang Morning Post. Photos showed what appeared to be part of the tail of the Long March 3B rocket used to propel the Chang’e-3 craft, lying amid broken boards and other wreckage.

Global Times’ Chen Ximeng reported that Yang was not the only one to have been affected:

By 3:00 pm on Sunday, over 160,000 people living in 11 townships of the county were evacuated to avoid danger from falling rocket pieces, Zeng [Jiancheng, an official from the county’s People’s Armed Forces Departments] said.

Since 1992, Suining has seen many village evacuations during about 30 launches of rockets from Xichang, Zeng said.

Most of the time, the wreckage has damaged property, save for two cases where people died from electric shock by accidentally touching the high-voltage power lines cut loose by fallen rocket pieces.

Ren Zili, a law professor from Beihang University told the Global Times that the rocket center should follow the model of some other countries and buy commercial insurance for locals whose safety or property might be threatened by the launch. [Source]

Reuters reports that China is developing recoverable, debris-free rockets to help alleviate the problem. But the country is also expected to shift most launches from Xichang—a site chosen in the 1960s more for security against naval and Soviet land attacks than for any aerospace-related reasons—to a new base, Wenchang, on Hainan, from where debris should fall harmlessly into the sea. Other benefits of the new location include lower latitude and correspondingly higher launch capacities, accessibility by ship for rocket delivery, and an adjacent theme park.

See also much larger chunks of rocket debris that fell in Gansu in October.