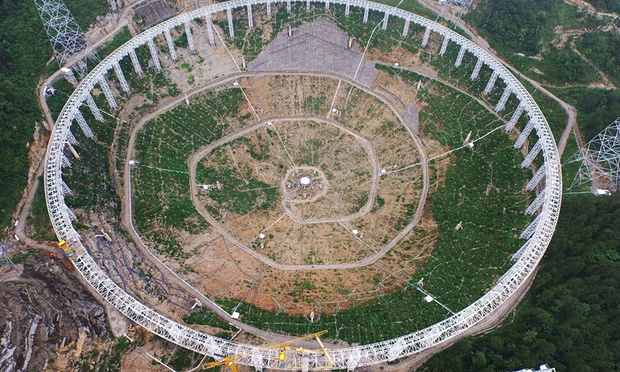 In March 2011, China began work on what will soon become the world’s largest radio telescope. The Five-hundred-metre Aperture Spherical Telescope (FAST), a $178 million project set to be completed in Guizhou in September of this year, will dwarf the 305-meter Arecibo Observatory in Puerto Rico, currently the world’s largest radio telescope. State media announced this week that over 9,000 Guizhou residents will be forced to relocate before FAST begins operation late this year. The Guardian’s Tom Phillips reports:

[…] 9,110 residents of Guizhou’s Pingtang and Luodian counties will be “evacuated” from their homes, the Xinhua news agency announced on Tuesday. Each will receive 12,000 yuan (£1,275) in compensation from the government’s eco-migration bureau, Xinhua added.

Li Yuecheng, a senior Communist party official in Guizhou, said the relocations, from an area within a 5km radius of the project, would help “create a sound electromagnetic wave environment”.

[…] Last year Shi Zhicheng, a Chinese astronomer, told the South China Morning Post that the telescope represented a giant leap in the hunt for alien life. “If intelligent aliens exist, the messages that they produced or left behind, if they are being transmitted through space, can be detected and received by Fast,” Shi said.

[…] Massive relocation projects have long been a Communist party speciality. Millions of Chinese citizens have been displaced in recent decades to make way for hydro-electric dams and other infrastructure projects or as part of “poverty alleviation” schemes. Those forced from their homes often complain of poor compensation. [Source]

Also at The Guradian, Tim Radford describes the soon-to-be finished FAST project as the most recent of many steps in China’s ongoing plan to become a “science powerhouse”:

[After the economic ruin of Mao-era policies…] in 1985, China announced another approach: it would become an intellectual power by investing in research and creativity. With centralized, unopposed authority, and unquestioned control, China could do what it liked, and this time the people liked what they got: hope, science and vision.

The start was slow, but within three decades, China has overtaken Japan to become the world’s second largest economy – behind only the US. And during that time its investment in research and development has grown: China is now a power in space research and manned flight; with a billion potential patients on its books, it has become a ambitious player in medical, biological and chemical research. Indeed, in 2015 pharmacologist Tu Youyou became the first Chinese winner of a Nobel prize for medicine, awarded for her discovery of a treatment for malaria.

[…] Science is an international endeavor, and although the Chinese government has encouraged indigenous talent an increasing proportion of scientific papers now carry the names of Chinese-based scientists in partnership with western (and western-based Chinese) researchers. In 2006, a 15-year-plan announced that China would become a “science powerhouse” by 2020. It is a powerhouse already.

[…] The people who have been told to move to make room for the world’s biggest reflector may not see it this way, but the new 500-metre telescope is not just a tool for tuning in to the distant universe: it is a felicitous examplar of the grand vision. [Source]

Read more about relocation in China, the nation’s space program, and scientific development, via CDT.

Phrase of the Week: Use the Internet Scientifically