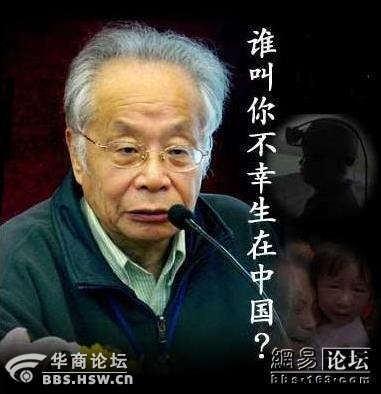 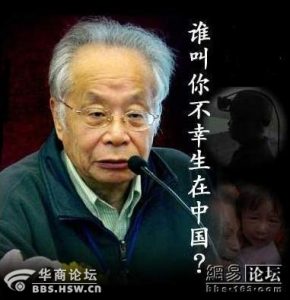 Question posed to a reporter by physicist and “crusader against unscientific thinking” He Zuoxiu; rhetorical question for Chinese citizens harmed by corruption in the name of progress.

He Zuoxiu, a member of the Chinese Academy of Science, advocated for former President Hu Jintao’s concept of a “scientific outlook on development” (kēxué fāzhǎn guān 科学发展观). In a 2005 interview with Southern People’s Weekly, When pressed as to whether the coal mine deaths were the avoidable results of government corruption, He denied this and claimed instead that the deaths were necessary byproducts of poverty. He then shot back at the reporter, “How were you so unfortunate as to be born in China?” (literally “Who told you to be born unluckily in China?”), adding, “In the process of development some sacrifices are unavoidable.”

For many netizens, He’s excoriation of the reporter symbolizes the emotional detachment with which the government pursues economic growth–the logical but soulless endpoint of “scientific development.”

This retort to scientific development has remained in currency after Hu Jintao left office. For instance, “How were you unlucky enough to be born in China?” appeared as a sad comment on Liu Lingli, a young teacher who was fired for “absenteeism” while she was being treated for cancer. She passed away in August 2016.