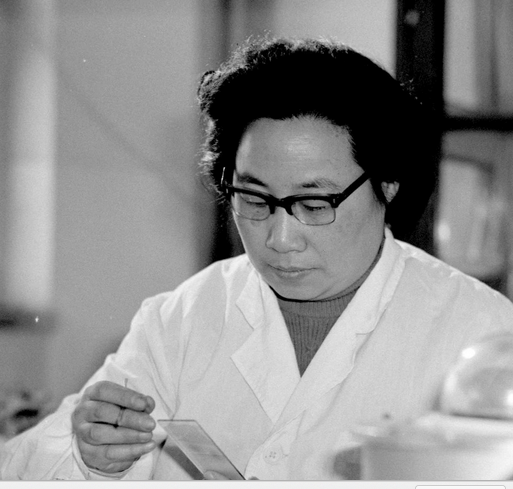 On October 5, 2015, 84-year-old pharmaceutical chemist Tu Youyou was one of three recipients of the Nobel Prize in Medicine, becoming the first Chinese national to win a Nobel in the sciences, and the first Chinese woman to win any Nobel award. Tu, who was honored with her share of the prize for discovering the malaria drug Artemisinin, found inspiration from traditional Chinese medicine in part of a secret project set up by Mao Zedong at the height of the Cultural Revolution. The Washington Post’s Jeff Guo reports:

The prize caps off a remarkable journey for Tu, a researcher without a Ph.D. who did much of her seminal work in secret, at a time when China was executing its own scientists en masse in revolutionary fervor. For years, Tu’s discovery of a cutting-edge drug developed from an ancient Chinese folk remedy was hardly known beyond the country’s borders.

Today, malaria is known mostly as a public health problem in developing nations, but a hundred years ago, it was a wartime headache for generals fighting tropical campaigns. Most of the world’s cinchona at the time came from Indonesian farms controlled by the Dutch, who were Allied sympathizers. The lack of supply during World War I prompted German scientists to research synthetic versions of quinine that could be manufactured in the lab.

One of those drugs, chloroquine, became the preferred treatment for malaria in the 1940s and 1950s, for its efficacy as well as its mild side effects. But the use of chloroquine became so widespread that resistant strains of malaria quickly began to emerge. By the 1960s, when the United States started sending troops into the jungles of Vietnam, chloroquine-resistant malaria was a scourge that had no good remedy.

[…] On May 23, 1967, Chinese scientists commenced Project 523, a secret effort that enlisted hundreds of researchers to discover a new malaria drug. The project launched at the height of Mao Zedong’s Cultural Revolution, a brutal time during which academics and intellectuals were murdered, imprisoned, or sent to “reeducation camps” in mass purges. […] [Source]

She visited traditional medical practitioners across China, and from those conversations, compiled a notebook, “A Collection of Single Practical Prescriptions for Anti-Malaria.” Among 2,000 traditional Chinese recipes, she said, one compound was found to be effective: sweet wormwood, or Artemisia annua, which was used for “intermittent fevers,” a hallmark of malaria.

In the interview, Dr. Tu told New Scientist that she reread a particular recipe, written more than 1,600 years ago in a text titled “Emergency Prescriptions Kept Up One’s Sleeve.” The directions were to soak one bunch of wormwood in water and then drink the juice.

But Dr. Tu said she realized that her method of preparation — boiling the wormwood — probably damaged the active ingredient. So she made another preparation using an ether-based solvent, which boils at 35 degrees Celsius, or 95 degrees Fahrenheit. When tested on mice and monkeys, she said, it proved 100 percent effective.

After the successful animal tests, Dr. Tu volunteered to be the first human subject, along with two colleagues. Satisfied that she had suffered no ill effects, she conducted clinical trials with patients. […] [Source]

Hype surrounding traditional Chinese medicine (TCM) has grown since Tu told state media this week that her breakthrough was “a successful example of collective exploration in Chinese medicine”, which she described – quoting late leader Mao Zedong – as “a great treasure”.

[…] Chen Qiguang, who leads a TCM research group in the Chinese Academy of Social Sciences, told Xinhua that boosting TCM should be regarded an important national strategy.

Chen, and scientists including Wang Hongguang, deputy director of a research institute affiliated with the Ministry of Science and Technology, and Zhang Boli, head of the China Academy of Chinese Medical Sciences, said legislation should be introduced to strengthen management of the sector, including assessment of professional qualifications and approval of new drugs. […] [Source]

The report also mentions swelling popularity in an obscure tourist attraction in the Guangdong mountains that was once the home of Ge Hong, the 4th century alchemist who wrote the ancient text that brought the remedy to Tu’s attention. A separate report from the South China Morning Post looks at how Tu herself has become the center of public attention.

As Tu Youyou’s Nobel has rekindled an interest in traditional medicine, an anonymous letter published by Quartz calls on Tu to publicly speak out against TCM remedies that rely on endangered animal products:

[…] Artemisinin has saved millions of lives of those infected with malaria. As you yourself say, the prize is a recognition of the what traditional Chinese medicine has to offer the world.

And now you have a chance to save even more lives.

I am sure you are aware of the countless poachings in Africa and beyond to find ingredients for the wrong brand of traditional Chinese medicine. No one is healed, but countless elephants, rhinos, tigers, pangolins, manta rays, and other endangered animals are lost.

Many are going to misinterpret the praise coming your way to be praise for this brand of traditional Chinese medicine, which has become a $60 billion industry. Its practices don’t follow the rigors of modern science that you do. Most of the time the treatments don’t work, and if they ever do, no one knows if they will again.

[…] While there are Chinese herbs that may hold wonders like artemisinin, you and I know that rhino horns have nothing special in them. The chemical keratin that make up the horn is no different from the chemical that make up human nails. The same is true of elephant tusks, pangolin scales, and tiger claws. […] [Source]