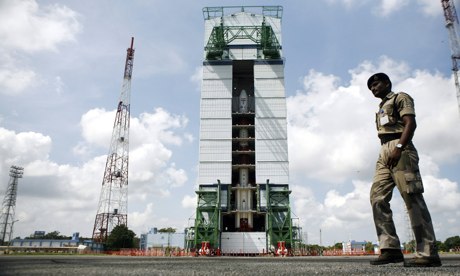 With today’s announcement that India launched a probe to Mars, becoming the first Asian nation to do so, the Chinese government has responded by encouraging cooperation in space exploration. The Times of India reports on the launch:

A rocket carrying the unmanned Mangalyaan orbiter lifted off this afternoon, making India the fourth country after the US, Russia and EU to send probes to Mars. It is due to orbit the red planet in September next year.

“Outer space is shared by the entire mankind. Every country has the right to make peaceful exploration and use of outer space,” Chinese foreign ministry spokesman Hong Lei told a media briefing when he was asked about India’s Mars probe.

At the same time, he said, the international community should make “joint efforts to ensure enduring peace and sustainable development of outer space”.

Asked whether China is apprehensive of India’s space programme, Hong said relations between the two countries are on a path of steady growth. “Political mutual trust between our two countries has increased and mutual cooperation has expanded,” he said. [Source]

China Daily has more on the official response:

China and India may work together to explore space instead of being engaged in what was called “aerospace competition”, experts said after the launch.

Ye Hailin, an expert on South Asian studies at the Chinese Academy of Social Sciences, said the Indian launch should be interpreted rationally as “a great achievement” of India that also deserves applause from the rest of the world.

“Like the Chinese, Indian people have their space dreams as well,” Ye said. “The Mars orbiter, if successful, will increase the human race’s store of knowledge and change our life.”

Calling outer space “the common heritage of mankind”, Foreign Ministry spokesman Hong Lei said on Tuesday that every state is entitled to the right to peacefully explore and make use of space. [Source]

However, the Global Times issued a more cautionary editorial, calling on China to focus on developing its space industry. Some observers criticized India’s decision to spend $73 million on the space mission when much of the country still lives in poverty. The Global Times warned against succumbing to populism when China faces similar choices:

India has an ambitious goal of leading Asia in this area, especially having an advantage over China. As poor as India is, New Delhi managed to carry out its Mars exploration program with a budget of only $73 million, much less than the spending of China and Japan. Nonetheless, it is not immune from critics at home and abroad, who wonder whether it’s worthy for a country where more than 350 million people live on less than $1.25 a day and one third of the population are plagued by power shortages to spend millions of dollars traveling hundreds of millions of kilometers for a few Mars pictures.

However, such suspicions haven’t prevented India from continuously casting money into exploring outer space. Besides launching communications and remote sensing satellites, India has also successfully blasted off its lunar probe. India is confronted with an increasingly complicated public opinion environment, similar to that which China has to face, on space development. India is poor, so is China when compared with its Western counterparts. New Delhi has set China as its target, while China views the advanced level of the US and Russia as a reference.

[…] China must keep alert on populism, avoiding letting it kidnap the national strategic interests. In front of an India that is striving to catch up with China, we have no other choice but to construct our comprehensive strategic power. [Source]

Some experts believe that despite China’s conciliatory response, India’s move marks the beginning of an Asian space race. From CNN:

“I believe India’s leadership sees China’s recent accomplishments in space science as a threat to its status in Asia, and feels the need to respond,” says Dr James Clay Moltz, professor at the U.S. Naval Postgraduate School, who sees increasing competition for space-related power and prestige in Asia that echoes the Cold War space race of the mid-20th century.

While Koppillil Radhakrishnan, the head of India’s Space Research Organization, has stressed his country is not engaged in competition with any other nation, the mission — to put a probe into an elliptical orbit around the red planet, mapping its surface and studying the atmosphere — has been freighted with patriotic significance since its inception. [Source]

Read more about China’s space program and about comparisons between India and China on a range of issues.