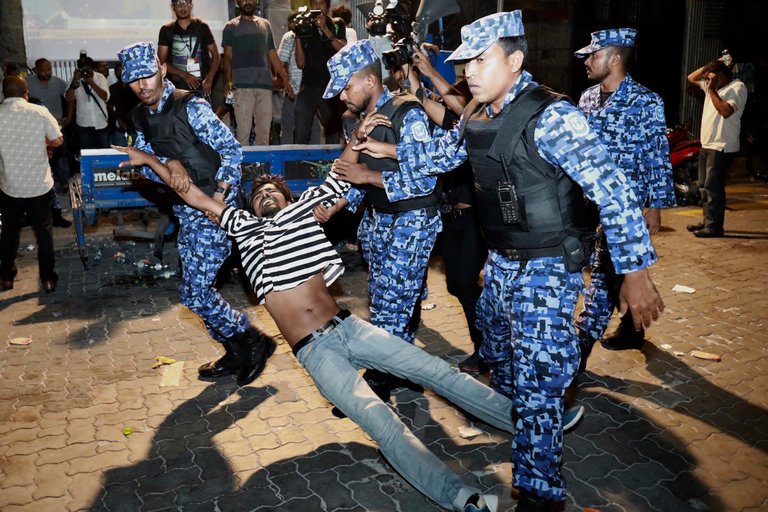 A number of Chinese naval warships have sailed into the East Indian Ocean this month amid a political crisis in the Maldives, where President Abdulla Yameen imposed a state of emergency on February 5th in response to a Supreme Court ruling that overturned convictions against several opposition leaders ahead of an upcoming election. Yameen sought and gained parliamentary approval earlier this week to extend the emergency for another 30 days. Engen Tham, Ben Blanchard, and Wang Jing at Reuters report:

A fleet of destroyers and at least one frigate, a 30,000-tone amphibious transport dock and three support tankers entered the Indian Ocean, news portal Sina.com.cn said, without linking the deployment to the crisis in the Maldives or giving a reason.

“If you look at warships and other equipment, the gap between the Indian and Chinese navy is not large,” Sina.com.cn said on Sunday.

It did not say when the fleet was deployed or for how long. [Source]

President Yameen has welcomed extensive Chinese investment into the Maldives as Beijing seeks to expand its influence in the region via the “One Belt, One Road” initiative–an ambitious trillion dollar trade and infrastructure project that aims to revive ancient transport networks connecting Asia, Europe, the Middle East and Africa. Critics, including former Maldivian president Mohamed Nasheed, have called into question the motive behind China’s infrastructure projects. From The Wall Street Journal:

As part of President Xi Jinping’s Belt and Road Initiative, Beijing granted loans and sent state-owned companies to develop Maldive ports and other public works. A new International Monetary Fund report projects the Maldives’ external debt will hit 51.2% of GDP in 2021 from 34.7% in 2016 as a result of the projects.

Now in exile, Mr. Nasheed accuses the government of allowing a Chinese “land grab” of at least 16 islands, and says Chinese loans for three projects account for nearly 80% of national debt. He wrote in an Indian newspaper earlier this month: “The cost of these projects to the Maldives are outrageously inflated, allowing regime cronies to line their pockets, while future generations of Maldivians are saddled with gigantic debts they will never be able to repay.”

The IMF says the cost of servicing the external debt will average $92 million a year for four years—though the government’s total revenue is only about $1 billion. If returns on the projects fall short, the Maldives may find itself like Sri Lanka, which built the port of Hambantota with Chinese loans. In December Sri Lanka turned over operation of the port on a 99-year lease to a Chinese state-owned company to avoid default. Pakistan likewise lost control of Gwadar port to China for 40 years. [Source]

Mr. Nasheed and other opposition leaders have repeatedly called on the international community to intervene, including urging military action by India, which has had longstanding strategic interest in the Maldives. Some observers have warned that the Maldivian crisis could set off friction between China and India as the two vie for greater influence in the region. While Chinese military presence in the India Ocean poses a concern for India, the Indian government is expected to steer clear of conflict. From Mujib Mashal at The New York Times:

Indian officials have expressed concern about the situation but have remained measured in their response. Indian influence in the Maldives has waned since 2012, when it did not stand firmly behind Mr. Nasheed, who had been an ally, as he was ousted from office.

Anand Kumar, a fellow at the Institute for Defense Studies and Analyses in New Delhi, said although India was clearly alarmed about losing influence to the Chinese in the Indian Ocean, it had struggled to respond.

But he said India would be ill advised to consider a military option against a sitting president, because its attempt to send troops to counter an insurgency that was fighting another ally, the Sri Lankan government, had turned disastrous.

Part of the dilemma is that “the Maldives is just another front for the Chinese,” Mr. Kumar said, citing its militarization of islands in the South China Sea as one example. “China has deep-rooted economic, political and military interests in Maldives, and it’s not going to be a win-win situation for India.” [Source]

At The Diplomat, Rajeswari Pillai Rajagopalan looks at why hesitation on the part of New Delhi could taint its credibility in the eyes of its South Asian neighbours.

[…] First, the Maldives is in India’s backyard, making China’s inroads there a matter of deep concern for New Delhi. The Maldives is only about 700 km from India’s Lakshadweep Islands and about 1200 km from the Indian mainland, too close for Delhi’s comfort to let a potential adversary set up shop. Just two months ago, the Maldives concluded a Free Trade Agreement (FTA) with China, much to India’s surprise. This reflects the distance that crept in between India and Maldives in recent years. In addition, the Maldives had endorsed Xi Jinping’s pet project, the Belt and Road Initiative (BRI), which also includes the Maritime Silk Road. New Delhi worries about where all this headed.

Second, there is the matter of how this will be perceived by other Indian neighbors as well as by others. India worries about its credibility in the eyes of its smaller neighbors; any Indian hesitation in the Maldives could make these neighbors look towards China more actively. Similarly, smaller nations in South and Southeast Asia will makes their own judgments about India’s reliability, about whether they should trust India to stand up to China, depending on how they perceive India is behaving in its own backyard. If India is unable to settle the Maldives issue in its favor, smaller Southeast Asian states could decide that their best bet is to make their own individual peace with China.

New Delhi would clearly prefer not to intervene militarily, if only because of how uncertain such ventures are. But India also faces increasing difficulties, especially given Yameen’s obduracy. How India navigates through this crisis will have significant impact on not only the neighborhood, but also broader geopolitics including Sino-Indian relations. [Source]