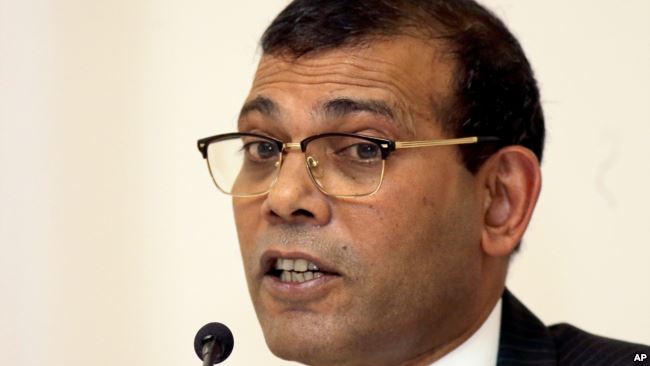 Responding to questions about a recent claim by the exiled former President of Maldives Mohamed Nasheed that China is “buying up” the island nation’s land, infrastructure, and sovereignty, Foreign Ministry Spokesperson Geng Shuang yesterday dismissed the accusations as “totally groundless.” The AP’s Mohamed Sharuhaan and Christopher Bodeen report, providing context on the ongoing political turmoil in the Maldives:

“China’s aid to the Maldives has no political strings attached and does not harm the Maldives’ sovereignty and independence at all, still less jeopardize security in the Indian Ocean,” Geng said at a regularly scheduled news conference.

Nasheed is wrapped up in the political turmoil that has swept the archipelago nation since the Supreme Court ordered his release in absentia as well as the release of other several jailed opposition leaders. Current President Yameen Abdul Gayoom rejected the order and declared a state of emergency this week in which two of the justices were arrested.

Yameen has cracked down on civil liberties since coming to power in 2013, imprisoning or forcing into exile nearly every political leader who opposes him.

Nasheed told reporters late last month in the neighboring country of Sri Lanka that Yameen has opened the doors to Chinese investment without regard for procedure or transparency. [Source]

The AP last month reported on Nasheed’s accusations that Chinese investments were actually a scheme to buy influence in the Maldives:

Mohamed Nasheed told reporters in Sri Lanka’s capital that current President Yameen Abdul Gayoom has opened the doors to Chinese investment without any regard for procedure or transparency.

“A large emerging power is busy buying up the Maldives,” Nasheed said, explaining that he was referring to China.

China considers Maldives to be key cog in the Indian Ocean in its “One Belt One Road” project along ancient trade routes through the Indian Ocean and Central Asia. The initiative is Chinese President Xi Jinping’s signature project and envisages building ports, railways and roads to expand trade in a vast arc of countries across Asia, Africa and Europe.

Nasheed is disqualified from contesting the presidency this year due to a prison sentence. He is now living in exile in Britain after going there for medical treatment while in prison. [Source]

Chinese Foreign Minister Wang Yi told the Maldivian president’s special envoy Mohamed Saeed in Beijing that China was closely watching the political crisis in Male, the ministry said in a statement on Friday.

“China has poured in unconditional aid and assistance for the Maldives’ socio-economic development. The cooperation between China and the Maldives benefits all people in the Maldives and we hope the cooperative partnership of the two nations can be developed in a healthy manner.”

[…] The Maldives sent envoys to China, Pakistan and Saudi Arabia to brief them on the political crisis, but no envoy went to India because the dates were not “suitable”, according to the Maldivian embassy in India. [Source]

The Indian Express reports on New Delhi’s official stance on the situation in the Maldives:

Following the imposition of Emergency in the Maldives, India said it was disturbed by the move and the political reasons that led to it. “We are disturbed by the declaration of a state of emergency in Maldives, following the refusal of the government to abide by the unanimous ruling of the full bench of the Supreme Court on February 1, and also by the suspension of constitutional rights of the people of Maldives. The arrest of the Supreme Court Chief Justice and political figures are also reasons for concern,” the Ministry of External Affairs said in a statement. However, government sources told The Indian Express that despite Nasheed’s call for intervention, India would not send troops on ground to sort the political crisis.

Appealing for India’s help, Nasheed, who heads the Maldivian Democratic Party (MDP) and is based in Sri Lanka, said: “We would like the Indian government to send an envoy, backed by its military, to free the judges and the political detainees, including former president Maumoon Abdul Gayoom, from detention and to bring them to their homes. We are asking for a physical presence,” tweeted Nasheed who is still viewed in New Delhi as “immature” and “brash”.

“They want us to send warships and put boots on the ground, but we don’t want to be drawn into sending the military to sort out a political mess there,” sources said. Even just sending a special envoy was out of the question, sources said, as there was no guarantee that Yameen would engage with such a representative. Instead, they said, India is hoping to work together with a group of countries, including the US and Saudi Arabia, to bring pressure on the Yameen government through “sanctions”, if needed. […] [Source]