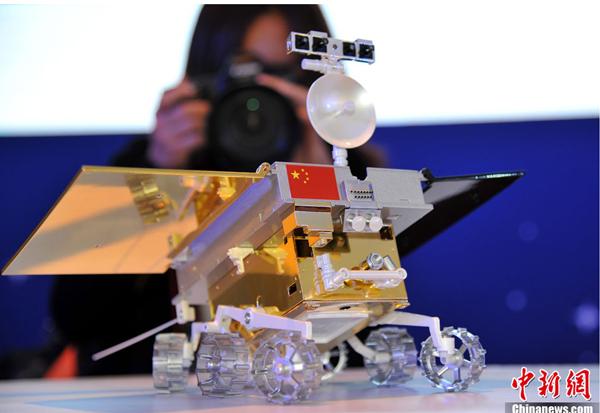 China announced last week that it would hold an international contest to name its first moon rover, which is due to touch down in December. From Xinhua:

Zhao Xiaojin, director of the aerospace department of the China Aerospace Science and Technology Corporation, depicted the lunar rover an orbiter adaptable to harsh environments; a highly efficient and integrated robot; and a high altitude “patrolman” carrying the dreams of Asia.

The Chang’e-3 mission to moon, named after a Chinese lunar goddess, will take place in December, when a Chinese spacecraft will soft-land on a celestial body for the first time. [Source]

Some weibo users’ suggestions have been predictably irreverent. From China Real Time Report:

“It has to be called The Chengguan,” wrote one user of Sina Corp.’s Twitter-like Weibo microblogging service. “It can demolish that crappy flag the Americans have been showing off up there the last half-century. No problem if the Americans get angry. We’ll just say this rover is a temporary rover, and that he’s already been fired.”

Other suggestions: “The From Ancient Times,” borrowed from a set phrase Beijing uses in pressing its territorial claims in Tibet and elsewhere; and “The 404 Not Found,” after the error page that typically pops up when trying to visit blocked websites inside China.

Among serious submissions, the choice that appears to have the most momentum is “The Jade Rabbit,” a reference to the mythical, exilir-mixing hare who is said to share real estate with Chang’e. […] [Source]

The rover mission is just one facet of China’s ambitious space program. State media have also recently emphasized the country’s growing prowess in launching satellites for navigation, monitoring natural disasters and scientific roles such as hunting dark matter. Looking further ahead, China took the opportunity of hosting the 64th International Astronautical Congress in Beijing last week to release details of its planned space station, due to launch in 2023. From Wang Qian at China Daily:

“Room in the station will be no less than 60 square meters, which is enough for astronauts to move freely,” said Xu Dazhe, general manager of China Aerospace Science and Technology Corp, at the five-day event that began on Monday in Beijing.

He said the station will also be able to support three astronauts on long-term missions.

[…] The station’s core module will be 18.1 meters in length and will weigh 20 to 22 metric tons. The space station will also consist of two self-contained laboratories.

Despite the friendly international gestures of the station invitation, the recent announcement of plans to help train other countries’ astronauts, and the rover-naming contest, The Economist wondered what other space-based intentions China might harbor:

In July, for example, the CNSA launched a trio of satellites, allegedly as part of a project to clean up space near Earth by removing orbital debris. Such debris is indeed a problem, given the number of launches that have happened since the hoisting of Sputnik in 1957. Nor did China itself help when, during the testing of an anti-satellite weapon in 2007, it blew one of its own redundant satellites into about 150,000 pieces. So a charitable view might be that this mission was a piece of contrition. Cynics, however, suspect that what was actually launched was another type of antisatellite weapon—or, at most, a piece of dual-use technology which could act as a space-sweeper as well.

One of the newly launched probes was indeed equipped with a robotic arm of the sort that might pick up space litter. The other two were, the story went, to stand in for bits of debris. But once initial tests were over, the satellite with the robotic arm made a number of unusual manoeuvres and approached not one of the devices it was launched with, but rather an ageing satellite in a different orbit—just the sort of behaviour that would be useful if you wanted to eliminate an observation or communication satellite belonging to another country. [Source]

Such wariness, together with fear of military technology leakage, has led the U.S. Congress to block most cooperation with China in space despite warnings of missed opportunities and compromised long-term American interests. Another casualty of congressional suspicion was former NASA contractor Jiang Bo, who was accused by Republican congressman Frank Wolf of attempting to smuggle sensitive data back to China, and later cleared. Nevertheless, president of the Chinese Academy of Sciences Bai Chunli last week cited areas of cooperation that had survived the ban, while NASA chief Charles Bolden expressed “highly serious” ambitions for further collaboration. But skepticism remains, according to South China Morning Post’s Stephen Chen:

A geodesist with the school of astronautics at Beihang University said yesterday the statement had not changed his pessimism over co-operation between China and the US in space, even on science.

“That’s just the narrow mindset of politicians. As scientists, we want to share everything. Co-operation between the two largest economies in the world will only benefit the entire human race.” [Source]