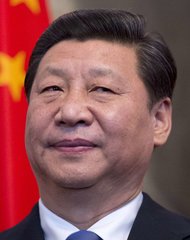 Following months of speculation since its announcement in last November’s wide-ranging reform blueprint, China’s new National Security Commission met for the first time this week. President Xi Jinping, whose leadership of the body has been read as both evidence of and a boost to his personal political power, said that the commission will provide comprehensive oversight of both foreign and domestic aspects of national security amid an unprecedentedly diverse and complex array of challenges. From Chris Buckley at Sinosphere:

Mr. Xi listed areas that could come under the commission’s oversight: politics, homeland security, military affairs, economic policy, culture, science and technology, information, the environment and natural resources, and nuclear safety. The national security system, he said, must be “centralized and unified, effective and authoritative.”

In theory, then, China’s National Security Commission could be very busy, overseeing issues that the United States National Security Council leaves to others. In practice, there are still many unanswered questions about how the Chinese body will operate, and how it will live alongside the many other party and state agencies and bureaucracies with a stake in security issues. [Source]

Ben Blanchard also reported on the inaugural meeting at Reuters:

While Xi listed areas ranging from economic to nuclear security, he also said the commission had to “take political security as its base” and “seek stability”, references to protecting the ruling Communist Party’s hold on power and dealing with domestic unrest.

[…] On Monday, Xi urged the air force to adopt an integrated air and space defense capability, in what state media called a response to the increasing military use of space by the United States and others. [Source]

Experts hailed the “authoritative” new body, according to the state-run Global Times:

[…] Experts stressed that comprehensive security threats require combined efforts from national defense, economy, public security and others, while the previous scattered structure proved to be insufficient without unified leadership.

“The national security system will also contribute to more authoritative foreign policies for China since the decisions will be made based on all-sided consideration in the future,” Yang said.

[…] Experts also suggested that the leading figures of the commission, which also include Premier Li Keqiang and top legislator Zhang Dejiang as deputy heads, showed Chinese characteristics through the combination of the Party, government and legislature. [Source]