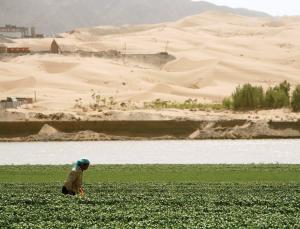 New Scientist’s Hal Hodson describes research into the use of bacteria to combat desertification in northern China:

Planting hardy grasses helps keep sand in place, but the wind can still whip away particles between the grasses. So Chunxiang Hu of the Chinese Academy of Sciences’s Institute of Hydrobiology in Wuhan has developed an alternative approach. She coats planted dunes with a mixture of photosynthesising cyanobacteria that can thrive in the semi-arid environment.

[…] Hu’s long-running trial shows that after eight years, dunes treated with cyanobacteria developed a biological crust nearly 1 centimetre thick when on the shady side of dunes. On the sunny side, the crust was about half as thick. The topsoil improved where the crust developed, spurring plant growth.

The method is vital if semi-arid regions are going to rebound on a reasonable timescale, says Brian Whitton, an ecologist at Durham University, UK. “Unless you do something to help, you’re probably talking centuries for it to recover naturally,” he says. [Source]

The government warned in 2011 that defeating China’s deserts could take 300 years. Direct economic costs of desertification in China have been estimated at over $8.4 billion annually.