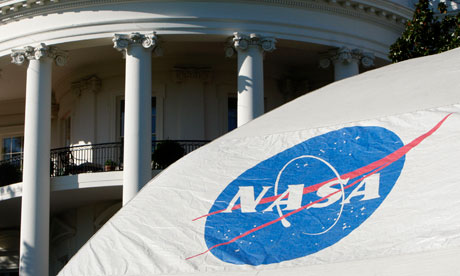 As NASA lies mostly dormant amid the U.S. government shutdown, scientists are challenging a Congressional ban on the use of its facilities by Chinese nationals. The restriction has left Chinese researchers barred from a major conference next month on the agency’s Kepler space telescope program. From Ian Sample at The Guardian:

Geoff Marcy, an astronomy professor at the University of California, Berkeley, who has been tipped to win a Nobel prize for his pioneering work on exoplanets, or planets outside the solar system, called the ban “completely shameful and unethical”.

In an email sent to the conference organisers, Marcy said: “In good conscience, I cannot attend a meeting that discriminates in this way. The meeting is about planets located trillions of miles away, with no national security implications,” he wrote.

“It is completely unethical for the United States of America to exclude certain countries from pure science research,” Marcy told the Guardian. “It’s an ethical breach that is unacceptable. You have to draw the line.”

[…] Sir Martin Rees, Britain’s astronomer royal, said he “fully supported” Marcy’s position and called the ban “a deplorable ‘own goal’ by the US”. [Source]

The ban is one of a range of measures which almost entirely blocks NASA from cooperating with China as it did with the Soviet Union through much of the Cold War. While aimed at preventing technology theft, the restrictions have been accused of squandering major opportunities and compromising long-term American interests. The rules are not of NASA’s own choosing: carefully skirting them at the 64th International Astronautical Congress in Beijing last month, NASA chief Charles Bolden spoke of “highly serious” intentions for future collaboration, although considerable skepticism lingers. Meanwhile, China’s own space program is advancing on several fronts.