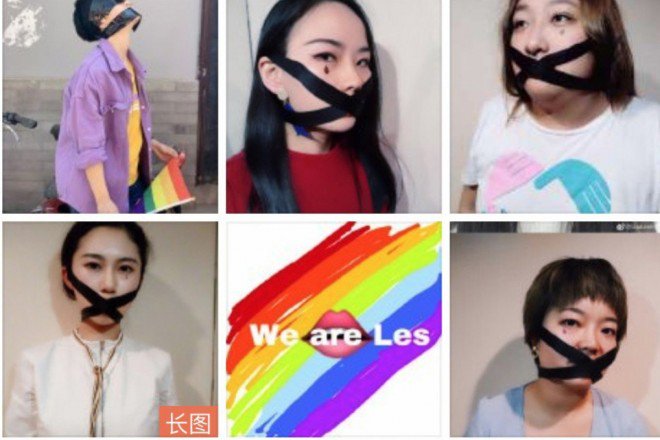 Weibo users on Friday discovered they were unable to access a popular “les” (short for lesbian) online discussion group. The discovery set off a flurry of angry posts, pushing the term “les” into Weibo’s top search terms, as users proclaimed “We are les” in a show of support for those protesting against the censorship.

Searches on Weibo for the “les” group, which had about 140,000 members and 46 million total views, turned up blank on Monday, and the top LGBT content result was a newly created “lesbians” group with only 13,000 members.

[…] Another group for discussing lesbian content, called “les sky”, on the popular culture website Duoban also appeared to become unsearchable briefly over the weekend, raising fears that the Weibo’s decision was part of a wider campaign. [Source]

This censorship operation comes almost exactly one year after the microblogging platform made similar attempts to remove gay-themed content in an effort to “clean up” the site last April, before the decision was reversed following a wave of protest. Just as with last year’s attempted purge, the recent censorship campaign has been partially reversed after a backlash that saw Weibo filled with rainbow flags and hashtags in support of the LGBT community. Laurie Chen at Inkstone reports:

Weibo on Monday restored a community titled “les” (short for lesbian), after first shutting it down on Friday, as Chinese internet users have flooded the site with symbols in support of lesbians and messages of solidarity.

[…] By Tuesday afternoon, posts with the hashtag “les” and “I am les” in support of the lesbian community have been viewed more than half a billion times.

LGBT people “always hope that the country they were born in will one day be willing to accept them, instead of hiding, ignoring, avoiding and even censoring them time after time,” wrote one lesbian Weibo user under the hashtags. [Source]

But a similar discussion page – the “les” supertopic on Weibo, viewed 480 million times – has been blocked since Friday, despite a highly visible social media campaign protesting the platform’s silencing of lesbian and bisexual women.

[…] Many also posted selfies with their mouths taped shut, and some users even found they were blocked from using the rainbow flag emoji in their WeChat display names.

[…] Users also created a new “LESBIAN” supertopic which had racked up 27 million views.

[…] Many straight allies also spoke up in support of lesbians, who have traditionally been less visible in China than the gay community.

“Many LGBT people just want to be with someone else who also loves them, why do some people want them to disappear? Stifling their voices and preventing them from speaking out, does that make them not exist?” said a commenter from Beijing who identified herself as straight. [Source]

Although attitudes toward LGBT issues in China are changing, discrimination exists and practices such as sexual orientation conversion therapy are still performed by public hospitals and private clinics. Members of the LGBT community continue to face state censorship as authorities seek to push back against the growing visibly of LGBT groups in the media. LGBT elements were censored from a broadcast of the Eurovision Song Contest last May, following introduction of regulations in 2016 banning all “abnormal sexual relationships or behavior” from appearing on air. LGBT dating apps have also been shut down by authorities in recent years and related community events and conferences have also been targeted. More recently, several minutes of LGBT content from Bohemian Rhapsody were cut from the version of the film released in China.

In censoring LGBT content alongside pornographic and violent material last year, Sina cited the need to comply with Chinese laws and regulations as its central motive. CNN’s James Griffiths writes that both this and last year’s Weibo incidents illustrate how difficult it can be for China’s internet companies to know what content to take down when they are largely left to regulate themselves.

While there are some hard and fast rules for what content is banned in China — pornography, separatism, terrorism, for example — for the most part companies are expected to regulate themselves. There is no comprehensive blacklist of sensitive topics, so companies, and their legions of censors, must second-guess whether individual posts or discussions are to be allowed, based on their interpretation of public pronouncements and campaigns.

“Due to the lack of transparency in censorship decisions by the Chinese government and Chinese social media companies, we won’t be able to really know who was behind the censorship and then the reversal,” Yaqiu Wang, a researcher at Human Rights Watch and expert on Chinese media, told CNN.

She said that a vague clause in the recently passed Cybersecurity Law, on respecting “social morality,” may “have driven Weibo to censor LGBT content.”

The general lack of certainty about what they’re supposed to police often leads companies to err on the side of caution, fearing potentially ruinous punishments for failing to censor something they should have. […] [Source]