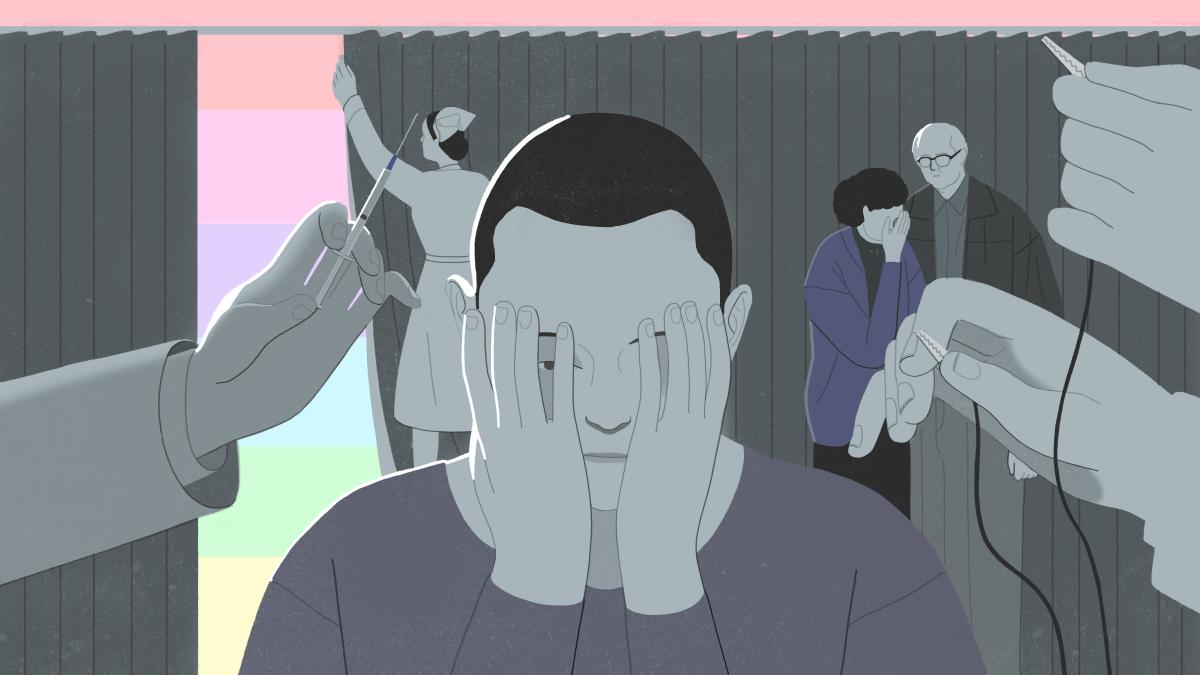 In a new report released this week, New York-based Human Rights Watch called on the Chinese government to prohibit public hospitals and private clinics from conducting sexual orientation conversion therapy, a pseudoscientific practice that claims to change individuals’ sexual orientation through the use of drugs, electric shock therapy, and other extreme measures.

“It’s been more than 20 years since China decriminalized homosexuality, but LGBT people are still subjected to forced confinement, medication, and even electric shocks to try to change their sexual orientation,” said Graeme Reid, LGBT rights director at Human Rights Watch. “If Chinese authorities are serious about ending discrimination and abuse against LGBT people, it’s time to put an end to this practice in medical facilities.”

The 52-page report, “‘Have You Considered Your Parents’ Happiness?’: Conversion Therapy Against LGBT People in China,” based on interviews with 17 people who endured conversion therapy, describes how parents threatened, coerced, and sometimes physically forced their adult and adolescent children to submit to conversion therapy. In these facilities – including both public hospitals, which are government-run and monitored, and private clinics, which are licensed and supervised by the National Health and Family Planning Commission – medical professionals subjected them to “therapy” that in some cases entailed involuntary confinement, forcible medication, and electroshocks, which can constitute a form of torture.

[…] While the Chinese Psychological Society has issued professional guidelines that prohibit discrimination due to sexual orientation during psychology counseling practice, professional associations have not prevented medical practitioners from conducting conversion therapy. All 17 people interviewed by Human Rights Watch were emphatic that they would not have submitted to conversion therapy were it not for intense family and societal pressure. None provided free and informed consent. Three said they tried to escape from the facilities in which they were being held. One, Luo Qing, described attempting to flee: “I was getting really close to the unguarded door, but before I could get to the door, the two security guys caught up and got me. The next thing I know is that I was on the floor.”

Five people described to Human Rights Watch undergoing electroshock “therapy” as part of their conversion “treatment.” They were given some sort of stimulus – typically images, videos, or verbal descriptions of homosexual acts – while simultaneously being subjected to pain or discomfort produced by electroshocks. Patients were then meant to associate their homosexuality with unpleasant or painful sensations with a view towards quelling their sexual impulses towards people of the same sex. Four of the five said they were unaware that they would be subjected to such treatment, compounding their trauma. As Liu Xiaoyun (a pseudonym) said, “As they turned it up, I started to feel pain instead of just numb. It felt like… having needles stabbing my skin. Then after a few minutes, my body started trembling… it was not until later did I realize that was an electroshock machine.” [Source]

Family pressure is cited as one of the main reasons that lead individuals to pursue conversion therapy. A number of interviewees were forced to undergo conversion treatment as a result of coming out to their parents. James Griffiths at CNN reports:

Those interviewed by HRW described being pressured by their parents and families, with some even saying they were forced into conversion therapy and held against their will.

“My dad kneeled down in front of me, crying, begging me to go,” one man told HRW. “My dad said he did not know how to continue living in this world and facing other family members if people found out I was gay.”

Traditional parental pressure to continue the family line and produce grandchildren has been exacerbated by China’s one-child policy, which was only relaxed (and not completely) last year, meaning LGBT people are often their parents only hope of having grandchildren.

Because same-sex marriage is not legal in China, and same-sex couples cannot adopt children, this can lead them to enter into sham marriages in order to have children, or be pressured — or forced — into conversion therapy. [Source]

Additional accounts by those interviewed reveal the prevalence of verbal harassment and insult that take place as part of these therapies. From Zheping Huang at Quartz:

“Sick,” “pervert,” “diseased,” “abnormal,” “dirty,” and “slutty”—these are the terms doctors and psychiatrists have used to describe the interviewees, most of whom said they were subjected to verbal harassment and insulting language in conversion therapy. A gay man from northern Hebei province who received conventional therapy three years ago said:

I sat down, and the doctor gave me a form and asked me to fill it out… The doctor started saying to me: ‘You are sick. You know that yourself, right? I am not lying to you. If you feel like having sex with another man you are sick. But don’t worry about it too much now, I can help you with that. This is why your parents brought you here.’

Zhang remembered a similar conversation with her doctor:

This is pretty much what that doctor told me: ‘This [homosexuality] is promiscuous and licentious. If you don’t change that about yourself, you will get sick and you will die from AIDS. You will never have a happy family… Have you ever considered your parents’ happiness?’ [Source]

Homosexuality was decriminalized in China in 1997 and subsequently removed from the Chinese Society of Psychiatry’s list of mental disorders in 2001. Several court cases in recent years have challenged conversion therapy and other prejudices against China’s LGBT community. In 2014, a gay man successfully sued a psychiatric clinic for administering shock therapy. In November 2015, a college student challenged China’s education ministry for portraying homosexuality as a psychological disorder in textbooks. Last year, a labor arbitration panel in Guiyang held a hearing in China’s first transgender employment discrimination case.

Read more about gay rights and sexuality change therapy in China, via CDT.