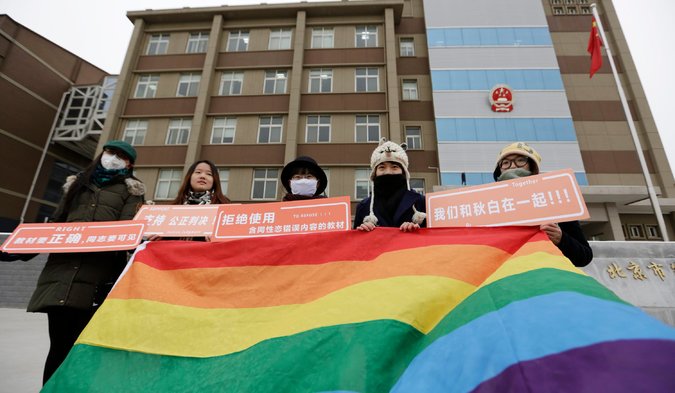 The Washington Post’s Emily Rauhala reports on Chen Qiuyan (aka Qiu Bai), a 20-year-old college student in Guangzhou who has challenged China’s Ministry of Education after discovering homosexuality categorized as a mental disorder in many official textbooks:

Outraged [after finding homosexuality labeled as a “disorder” when attempting to research human sexuality], the college student decided to challenge China’s Ministry of Education in court. It’s a case she hopes will call attention to anti-gay bias and persuade Chinese officials to ban this type of language in state-published books.

[…] “I have been fighting to make our voices heard for such a long time, and I finally have the opportunity,”  said Qiu, who uses a pseudonym, greeting supporters outside a Beijing courthouse on Tuesday.

[…] Qiu’s lawsuit is part of a nascent push to use China’s courts to advance the fight for LGBT rights. Amid a sweeping crackdown on rights lawyers and activists, campaigners are finding new ways to use Chinese law to call attention to discrimination.

[…] Qiu first raised the textbook issue with school and provincial officials but was unsatisfied with the response, she said. Frustrated, she sent a letter to the Ministry of Education requesting more information. By law, they had 15 days to reply or to request more time. They did not, so she filed suit.

The ministry is now looking into the issue, Wang said, calling it “a very good sign.” [Source]

China decriminalized homosexuality in 1997, and in 2001 the state psychiatric association removed it from its list of mental illnesses; however, as Ms. Chen found, homosexuality remains taboo in Chinese society, and many textbooks continue to list it as a disorder. The New York Times’ Chris Buckley reports:

Homosexuality is not outlawed in China, although the police can use other legal provisions against gays. And hostility and intolerance can make it difficult for many people to live as openly gay.

When Ms. Chen was puzzling over her own sexual orientation, she trawled the shelves of her university library for guidance. Many books, however, presented homosexuality as an illness or a failing that is to be cured or overcome, rather than embraced, she said. Five psychology textbooks published after 2001 did not reflect the new medical guidelines and instead classified homosexuality as an illness, she said.

[…] A study last year by the Gay and Lesbian Campus Association in China, based in Guangzhou, found that, in 31 psychology textbooks that were published in China after 2001 and that mentioned homosexuality, 13 classified it as a disorder.

University and college classes on student mental health also described homosexuality as a sickness, said Peng Yanhui, a friend and supporter of Ms. Chen who accompanied her to Beijing for the court meeting.

[…]Ms. Chen said her family rejected her after they learned that she was a lesbian.

“What I’m trying to do is eradicate prejudice in society toward comrades,” she said. “It’s very difficult to make your parents, that generation, to accept.” [Source]

The Times’ report also notes that the Ministry of Education officials’ claims to have no control over the materials selected by any educational institutions was met with skepticism by Chen’s lawyer, who pointed to China’s censorship policies. Peng Yanhui, who also uses the name Yang Teng in his advocacy, last year won a landmark lawsuit against the gay conversion clinic that had attempted to change his sexual orientation through shock therapy. Peng’s lawsuit last year, and Chen’s success in opening a dialogue with education officials this week, come as encouraging developments amid an increasingly tight landscape for activism in China.