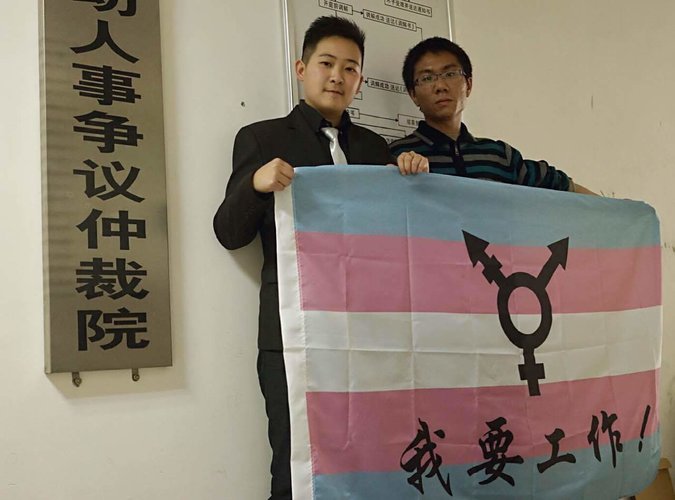 A labor arbitration panel in Guiyang held a hearing on Monday in China’s first transgender employment discrimination case, brought by a health services employee who was fired one week into the job for wearing men’s clothes. The Associated Press reports:

Huang Sha said his client, identified only as Mr C, 28, had gone to court in the southern city of Guiyang to seek compensation and an apology after being fired from his job at a medical services company because, although born a woman, he had dressed like a man.

[…] C told the newspaper, Guizhou Metropolitan, said he had not listed his gender when applying for a sales job with the medical services company in April 2015. “Moreover, they knew about my special gender situation,” he said.

However, after only a week, C said he was told he was being fired because his expression of gender “did not conform to traditional notions”.

“My sales job performance was in no way negatively affected by appearance. To fire me for this reason is to discriminate against me,” C said.

C and Huang are asking for a week’s salary plus another month in compensation. [Source]

Vanessa Piao at The New York Times has more on the case:

Mr. C’s lawyer, Huang Sha, said he was able to establish a labor relationship at the hearing on Monday even though no contract had been signed, because Mr. C had kept a recording of his conversation with Ms. Jin from when he was fired and because the company had admitted to the hiring at a mediation session in late March.

“The reason they provided for firing Mr. C, which was his gender expression, is not included in the list of reasons for dismissal in China’s labor law,” Mr. Huang said.

[…] Mr. Huang said although the company said it had dismissed Mr. C for incompetence, it provided no evidence to support this assertion. He said the company also said Mr. C had failed to wear its uniform, but later said uniforms were provided only to employees who had completed their probation periods.

[…] He filed his case on March 7. On March 14, he was notified that his case had been accepted for arbitration.

“Actually, we are suing in the hope that the case could help push for an anti-job discrimination law,” Mr. C said. “The compensation means nothing to me.” [Source]

Mr. C’s court hearing comes amid broader efforts by Chinese activists to use the country’s court system to challenge prejudices against China’s LGBT community. The Washington Post’s Emily Rauhala reports on some of the most recent success stories:

In September 2015, Fan Popo, a well-known Chinese filmmaker, filed suit against China’s powerful censorship organ, the State Administration of Press, Publication, Radio, Film and Television (SAPPRFT), demanding information about why his film, “Mama Rainbow,” was pulled from the Web.

Fan’s case turned on disclosure rules, not gay rights. But by taking on one of China’s most powerful government bodies, he was able to call national and international attention to the practice of blocking LGBT-themed content from Chinese television shows and films.

In January, a Chinese court scheduled a hearing for the country’s first same-sex marriage case. The case challenged a local civil affairs bureau to justify why two men could not register to marry.

The case was postponed, but not before it generated a wave of (mostly positive) coverage in the Chinese media. The hearing is now set for Wednesday. [Source]