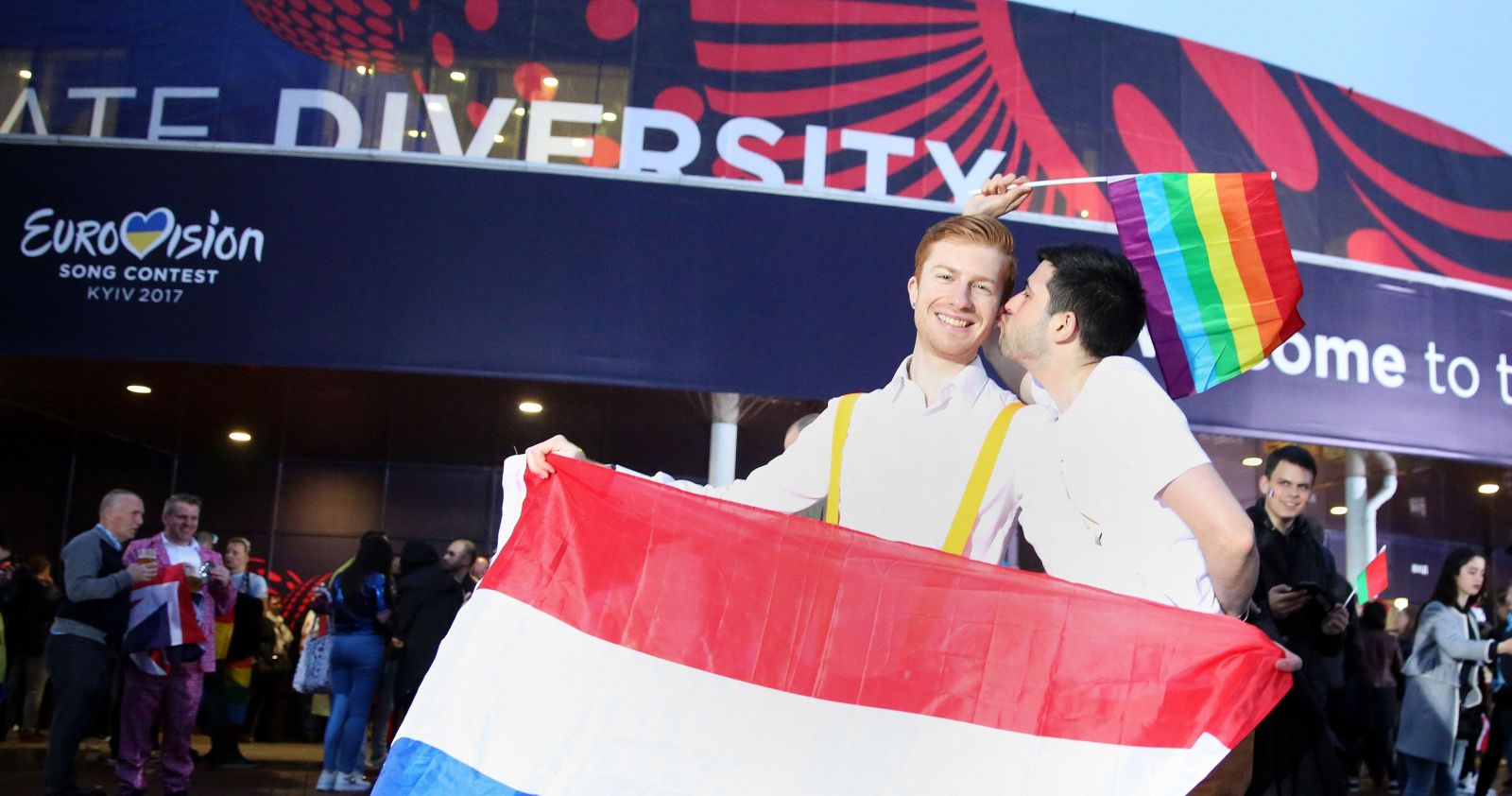 The European Broadcasting Union has terminated its contract with Chinese broadcaster Mango TV, banning the online streaming platform from airing Saturday’s Eurovision music contest final after it censored LGBT elements from an earlier semi-final performance. Stills from the broadcast showing the edits can be viewed via CDT Chinese. Anna Codrea-Rado at The New York Times reports:

The singer Ryan O’Shaughnessy, representing Ireland, sang a sentimental breakup ballad, “Together,” which featured two male performers dancing and holding hands. This section of the competition did not feature in the broadcast in China.

The state-funded news outlet Global Times said that the Chinese broadcaster also blurred images of the rainbow flag, an L.G.B.T. symbol, waved in the audience during Switzerland’s performance. The BBC News website showed a still from the broadcast in which the flag had been obscured.

[…] In a statement, the E.B.U. said that Mango TV’s actions were “not in line with the E.B.U.’s values of universality and inclusivity and our proud tradition of celebrating diversity through music.” [Source]

This censorship act is the latest in a series of moves by authorities to push back against the growing visibility of LGBT groups in the media. Regulations introduced in 2016 banned all “abnormal sexual relationships or behaviour” from appearing on air. Mango TV also obscured details from the performance of Albania’s contestant, which featured performers with tattoos. Tattoos have been banned from broadcast television since January.  In April, popular social media site Sina Weibo also imposed a ban on gay-themed content as a part of a broader “clean-up” drive. The ban was subsequently lifted after an outpouring of criticism from LGBT activists and supporters. Gay dating apps Zank and Rela were shut down by authorities in 2017.

[…] O’Shaughnessy, the Irish entrant, said he welcomed the EBU’s decision. “Love is love, it doesn’t matter whether it’s between two guys, two girls. I think this is a really important decision by the EBU, they haven’t taken this lightly,” he said in an interview.

“Love is Love” @Ryan_Acoustic reacts to the news that the EBU have terminated China’s Mango TV from broadcasting #Eurovision. For censoring #Ireland’s performance due to LGBT content. pic.twitter.com/gNlvJeFJti

In 2015, as the competition tried to expand its viewership outside of Europe, it invited Australia to participate and partnered with Mango TV to broadcast Eurovision live in China. A Hunan TV executive had then told ESC Daily, a site dedicated to Eurovision news, that China would be open to the possibility of participating in the contest as Australia did. [Source]

Although Eurovision is not widely popular in China, news of the censorship circulated around social media on Friday. One Weibo user wrote: “Is this really that sensitive? If things keep going this way, soon even rainbows in the sky will have to be blurred out.”

Another wrote: “SARFT is really disgusting,” referring to the country’s entertainment regulator, the State Administration of Radio, Film, and Television. It is unclear whether regulators ordered Hunan TV not to show O’Shaugnessy’s performance or whether the channel made the decision independently. [Source]

While attitudes toward LGBT issues in China are changing, practices such as sexual orientation conversion therapy are still performed by public hospitals and private clinics. A growing movement for lesbian and gay rights in recent years has led an increasing number of activists to turn to the country’s court system to challenge discrimination against the country’s LGBT community.