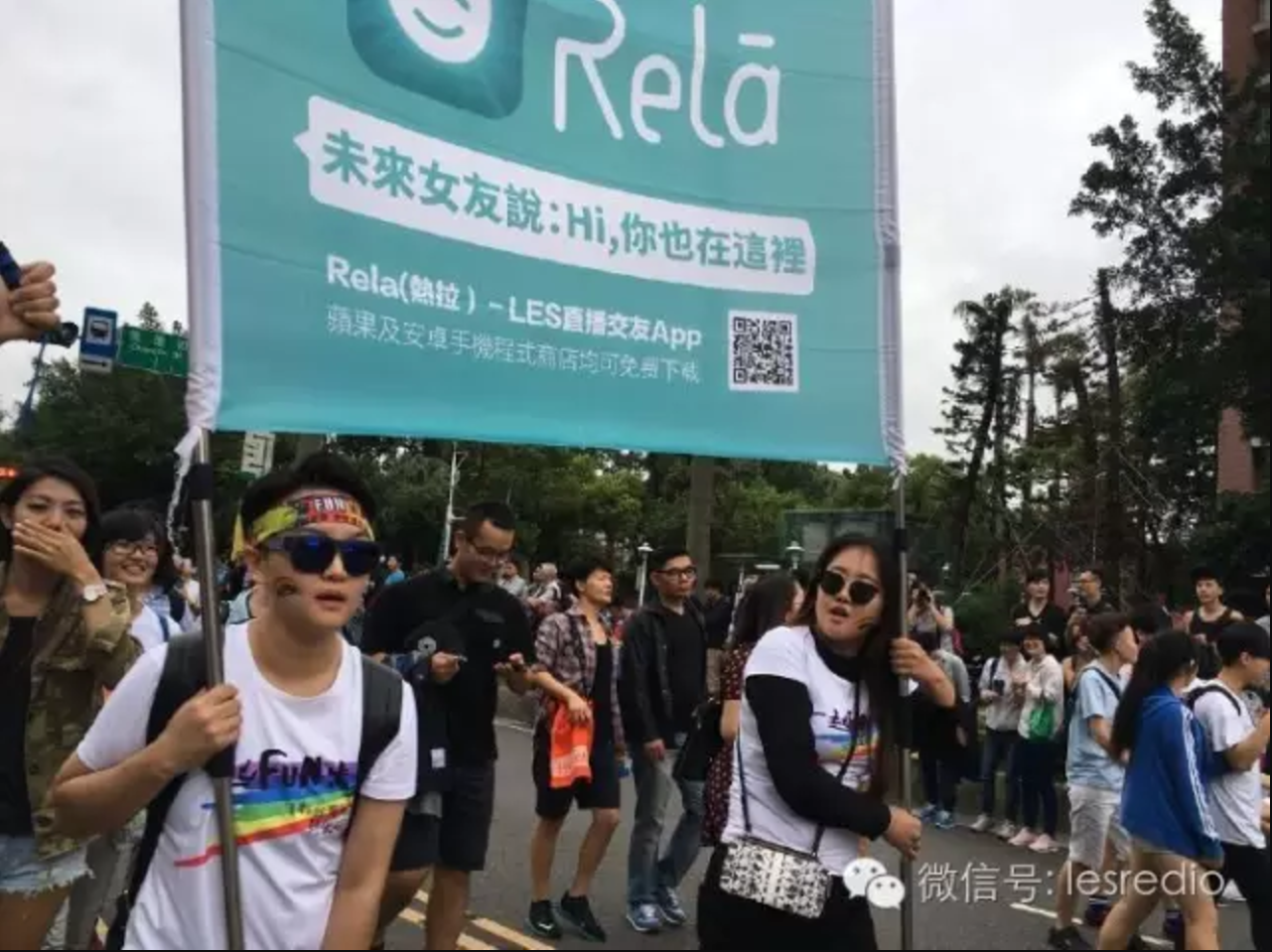 Even as some netizens praise Taiwan for becoming “China’s first region to legalize same-sex marriage” on May 24, Chinese authorities have shut down two popular gay dating apps. Gay app Zank went dark in April for allegedly violating pornography regulations. Rela (热拉), China’s top lesbian dating and social app, shut down around the time of Taiwan’s ruling on marriage equality. Rela has vanished from the Apple and Android stores. Links to the app from the Taiwan and Hong Kong iTunes stores pull up an “Item Not Available” window. Searches for “Rela” and “热拉” in the US iTunes store returns other Chinese lesbian apps, but no Rela. The app is still visible in the Xiaomi and 25pp stores, but comments on the latter show that the app can’t be downloaded, or that users who have already installed the app cannot access the network.

Rela’s website and Weibo account are also gone, while its public WeChat account (@theLapp) states that Rela has “temporarily suspended service” due to “major adjustments,” but that user data has been saved.

The shutdown came soon after PFLAG- and Rela-supported parents of LGBT children were booted from the informal marriage market at People’s Park in Shanghai on May 20, the “Chinese Valentine’s Day.” Amidst blowback from other parents at the park, police informed the mothers that they were holding an unregistered “advertising event” and forced to leave. Bibek Bhandari reports for Sixth Tone:

“What they’re doing here is illegal — they’re fraudsters,” one man said shortly after the women set up their posts. “LGBT issues shouldn’t be a public display. Their choice is wrong and is against Chinese values.” Other parents called homosexuality “abnormal.”

[…] “It’s quite common that police use the no-registration as an excuse to disperse these kind of activities or events” in China, said James Yang, program officer at the United Nations Development Program’s “Being LGBTI in Asia” project.

When LGBT groups have tried to seek permission for similar events in the past, however, they’ve been turned down, he said, citing one event that the security department cancelled last minute. [Source]

Rela had supported offline gay rights activism before the marriage market incident, as witnessed by this LES WeChat post from November 2016:

Rela users are mourning their loss on other social media. On Twitter:

Relā got suspended just for helping mothers search for partners for their queer daughters at a matchmaking park. Good job, China. ???? #热拉被封

One Rela falls, but millions of Relas will rise. Gay marriage is the way of the world. Simply blocking an app won’t stop the trend. The Great Qing died long ago. We will always be waiting for the day when equal rights arrive. [Chinese]

Of course I don’t believe gay apps can be shut down without reason. I don’t believe the Celestial Empire would discriminate, or even suppress, us homosexuals…
But I think it’s only a matter of time for gay marriage, because the Celestial Empire is rapidly gaining clout, and if we want to be an international power we must accept that we are a diverse country. Otherwise, how will we link up with the world, let alone lead it? Don’t you think so? [Chinese]

Last week, meanwhile, Xi’an police detained nine members of gay advocacy group Speak Out, hours before the conference they were hosting was slated to start. Speak Out had successfully hosted a conference in Xi’an in 2015. This time, the organization issued a statement explaining the cancellation, promising to refund ticket holders, and urging supporters to continue working towards equality. From Catherine Lai at Hong Kong Free Press:

“In those eight hours, we were completely cut off from the world – we were clearly told, ‘LGBT events can never be held in Xi’an,’ ‘Xi’an does not welcome LGBT events,’ and other such warnings,” the 2017 Xi’an conference’s curator wrote.
The organising team was forced to turn over their mobile phones, administrator access to their systems, their passwords, and a list of speakers to authorities, according to the curator’s statement. They were not permitted to contact anyone.
At 3am on Sunday, organisers announced that the event was postponed after they ran into problems with venues. Even though they tried up until Saturday to find a location, they were forced to switch venues four times. Venues cited reasons ranging from fire safety concerns to important departments holding meetings for cancelling the booking. The last venue cancelled their booking on Saturday night. [Source]

A conference organizer named Matthew told Reuters that he does not believe Speak Out’s problems were related to Taiwan’s marriage equality decision, saying “some people around me have said this to me, but I think the effect of Taiwan on the Chinese mainland is very limited.”
Just two years ago, Chinese gay rights activists made some important legal gains, including Yangzi Peng’s successful 2014 suit against a psychiatric clinic for giving him shock therapy. Last month, the court hearing began for Yu Hu’s suit against a Henan mental hospital for administering “conversion therapy.” Now, China’s LGBT rights activists faces new challenges as Beijing restricts non-governmental organizations and cracks down on civil society actors. But some still have hope, including Li Maizi, one of the “Feminist Five” detained in 2015, and one of the invited speakers at the cancelled Speak Out conference. From Quartz’s Echo Huang:

Some obstructive forces from the government are still “trying to prevent same-sex marriage from becoming a mainstream topic,” says Li. But she added, regardless of its political identity, Taiwan’s cultural similarities and geographical proximity will motivate gay people on the mainland to strive for their rights. [Source]

On May 24, Beijing Kunlun Technology announced that it will fully purchase Grindr, the world’s biggest gay dating app. Kunlun has already acquired a 61.5% stake. Read more about LGBT rights via CDT.