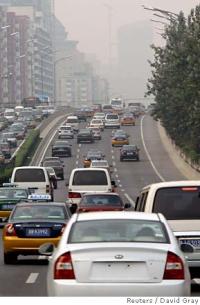 It was the frugal minicar that lured the Liu family to the showroom, but it was the full-size sedan that hooked them. Like countless other first-time auto buyers in China, the Lius were moving up in the world, and getting four wheels with plenty of steel was a key part of that process.

“A car! This means so much to us,” said Liu Yang, while her husband, Liu Yue, fiddled with the dashboard of the Chery Eastar sedan that they were about to buy in a showroom in suburban north Beijing. The biggest car-buying boom in world history is under way in China as vast numbers of people join the middle class, abandon their bicycles for autos and sport utility vehicles – and, in the process, add to China’s already fast-growing emissions of greenhouse gases. [Full Text]

[Image: A driver with no license plates drives along a congested road in Beijing on a day when autos with license plates that end with an even number were not supposed to be on the streets, photo by David Gray from Reuters.]