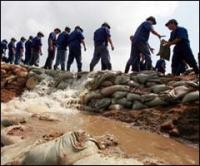 From AP via Guardian.co.uk:

Families of 181 miners trapped in flooded coal mines in eastern China and presumed dead lashed out at one of the companies Tuesday, complaining it had ignored safety warnings to halt work.

Rescue workers were pumping water in a bid to reach 172 miners missing for four days in the Huayuan mine and nine others in a smaller mine run by another company “despite dim hopes for anyone to survive,” the official Xinhua News Agency reported. The miners have been trapped since Friday afternoon when a dike collapsed, several hours after other mines in the area had pulled their workers to the surface because of flooding fears. [Full Text]


See also: Outrage in China over coal mine tragedy from Channelnewsasia.com.

[Image: Chinese miners rush to dam up a river that has flooded the Zhangzhuang mine, from Channelnewsasia.com]