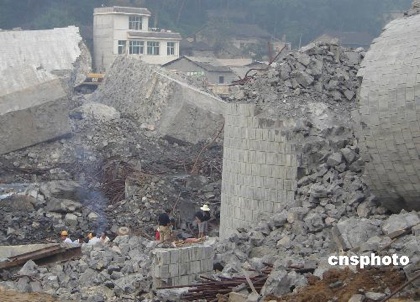 While other domestic journalists were stopped to investigating this accident, the official Xinhua News Agency had latest death toll in Tuojiang Bridge collapse. From AP, via The International Herald Tribune:

The death toll in the collapse of a bridge in southern China jumped to 64 after rescuers found 17 bodies in the rubble, a state news agency said.

It was unclear how many victims might still be buried under the wreckage of last Monday’s collapse in the tourist town of Fenghuang, the Xinhua News Agency said Saturday, citing rescue officials.

On Friday, rescuers blasted away stone and concrete to search under the rubble of the bridge, which collapsed while under construction.

Many of those killed in one of China’s worst building accidents in years were construction workers. Xinhua said it was uncertain how many had been working on the bridge, because they came from seven companies and some were day laborers. [Full Text]