The latest incarnation of the one yuan bill, the fifth in P.R.C. history, went into circulation in 2004. The front of the note, like all others in the series, shows the face of Mao Zedong. The back depicts the fabled West Lake in Hangzhou, and normally it looks like so: 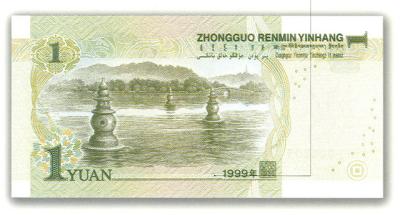 This year, however, a few people have come upon one-kuai currency with minor modifications: 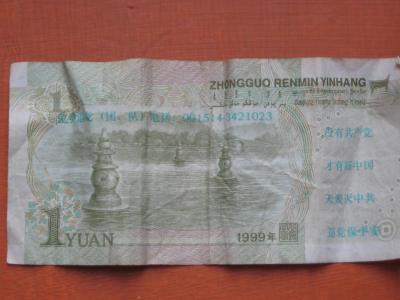 And down the right margin, it reads:

A Canadian friend received the doctored bill in the form of change from a Beijing cabbie a couple of weeks ago, and being a good honest chap (in short, a Canadian), he kindly agreed to make an even trade for the purpose of this post.

It turns out others in China have found funny money with the same message. In January, someone wrote in
to the Baidu question-time page “I know”ÔºàÁü•ÈÅì) reporting the discovery of one such note (sans pic) and asking if anyone knew anything about it.

Given minimal detail about the bills, Chinese respondents, at least those whose responses remained intact, were dismissive if not ignorant:

“You wrote that yourself.”

“You saw this with your own eyes?”

“Impossible, gotta be a counterfeit bill.”

“Impossible, you must be joking.”

Only the last respondent was of any help:

“The mint could never produce such a bill. The only explanation is: someone intentionally printed it on as a prank (ÊÅ∂Êêû).”

A good way to identify that subversive someone, it seemed, would be to call the number on the note. The area code placed it somewhere in the vicinity of Montreal. Late last week, this caller dialed the number from home in Beijing. An older-sounding Chinese woman picked up and answered in an crackly voice. She informed the caller he had reached one “Global Service Center for Quitting the CCP” (ÂÖ®ÁêÉÈÄÄÂÖöÊúçÂä°‰∏≠ÂøÉ).

The “Quit the Party” campaign was launched by the spiritual movement Falun Gong after China banned the group in 1999. FLG volunteers have since opened such “assistance centers” to facilitate the campaign. They claim over 20 million dropouts.

“Do you know why so many members want to quit the Party?” she offered, not pausing for a reply. “Well, now I’ll tell you.”

On came a torrential sermon: “How many people has the Communist Party killed since World War II? 80 million! All the abuses, the torture, the political violence. Every time there’s a political movement it results in violence so that’s why so many Party members have withdrawn, more than 26 million now, including police, officials, and army personnel But most people in China don’t know anything of this. Have you read the Nine Commentaries of the Communist Party? It’s all in there. Just get on the Web site, Dongtaiwang …”

She read off the digits and dots of one IP address. Nothing doing. So she read off another address. Presto. “You’d better download the Nine Commentaries now!” she ordered. “You won’t be able to get on later.”

Dongtaiwang (Âä®ÊÄÅÁΩë) is a Chinese-language portal of anti-Beijing news sources operated by “hacktivist” Bill Xia, the Falun Gong adherent behind the software Freegate and other Web applications designed to tunnel mainlanders to sites blocked in China. Dongtaiwang, needless to say, is one of them. The site carries the latest dope on elite politics and dissident cases and standing downloads of the Nine Commentaries, the series of essays published in 2004 by the Falun Gong-backed Epoch Times with the aim of “exposing” the Party’s past politicides.

Since the dropout campaign started, according to the running counter at the top of Dongtaiwang a week ago, 26,834,054 Party members had quit. Party figures paint an entirely different picture. The Party Organization Department announced this week that overall membership had swelled 6.4 million in the past five years, to 73 million-plus.

So how did her campaign figure, then? How to explain the discrepancy in the numbers? By the time these questions were posed, though, the Service Center volunteer was losing patience with what must have seemed the naivete of this caller. “See, you’re in China, so you don’t know. Aren’t you supposed to be a journalist? It’s your job to know such things.” (And you wonder why the foreign media have long since hit a stalemate on the issue of Falun Gong.)

The woman, who spoke no English, wouldn’t give her name or her precise location, though she did grunt when asked if she was speaking from Montreal. She said she immigrated from China ten years ago but other than pointing out her Southern accent, wouldn’t say from where. She did willingly acknowledge being a believer in Falun Gong.

“Do you know why so many people want to practice Falun Gong? Because Falun Gong tells people how to be good. That is why the Chinese Communist Party persecutes Falun Gong.”

She said she had heard about the modified one-yuan bills and recalled answering a few phone inquiries from others who had found them, but maintained that she herself had never seen one. Who doctored them? How many were printed over? “It’s such a big world out there,” she replied. “How should I know!”

“I just tell people how to get on the Web when they call,” she continued. “I tell them to read the Nine Criticisms. Then they’ll understand, and they’ll quit the Party. They’re so wicked already. If they don’t get out, they’ll go to Hell for sure. You know Hell, right? But this way perhaps they can save themselves from it.”