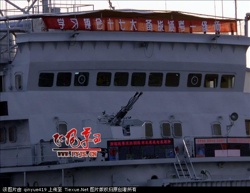 According to sources in China, in recent days the East and South China Sea fleets of the People’s Liberation Army [PLA] have carried out a large-scale “campaign-level [zhanyi ji] naval exercise”; the two big fleets staged a joint combat exercise in the Pacific east of Taiwan; the recent aviation controls in east and south China, which are related to this major exercise, will end tomorrow. Further reports claim that the PLA fleet on exercise had a “chance encounter” with the USS Kitty Hawk battle group which was heading for Hong Kong.

According to foreign news agencies, US Pacific Commander Keating said yesterday that he was “perplexed and concerned” that the Chinese side had refused Kitty Hawk entry to Hong Kong, holding that this was “absolutely not positive.” Keating also confirmed that this was the second time in one week that US ships had been refused entry to Hong Kong; three or four days prior to the Kitty Hawk incident, two US minesweepers requested to anchor in Hong Kong to refuel, having been affected by bad weather in the South China Sea, but this was refused by the Chinese Government. Kitty Hawk has now returned to its base in Japan, and the officers and men were forced to spend Thanksgiving at sea on 22 November.

According to websites in the interior, the joint exercise of the East and South China Sea fleets was conducted east of Taiwan and north of the Philippine archipelago, and its objective was to envelop and make a pincer attack on Taiwan from the sea.

The South China Sea fleet sent out detachments of new type-022 stealth missile ships, frigates, and modern missile destroyers; apart from the missile destroyer Shenzhen which is visiting Japan, a large battle fleet including the missile destroyer Guangzhou took part in the exercise. The East China Sea Fleet dispatched the modern missile destroyer Hangzhou imported from Russia; during the exercise, Kilo-class submarines bought from Russia successfully launched Russian-made SS-N-27 “Club” antiship cruise missiles for the first time; this missile can carry a 250 kg warhead, with a range of 220 km. Netizens in the interior have recently observed a China-made early-warning aircraft over Nanjing, capital of Jiangsu.

Apart from that, a regiment of the South China Sea Fleet’s Ninth Aviation Division, equipped with new China-made Flying Leopard fighters, for the first time transferred from Hainan Island to the east China region to take part in the exercise, demonstrating that the Flying Leopard has all-weather sea combat capability.

On the other hand, Japan’s Sankei Shimbun reported yesterday that sinodefence.com whose headquarters is in England has for the first time openly published a photograph of China’s new Type-094 “Jin-class” nuclear missile submarine, which has aroused the Japanese Defense Ministry’s concern; it is now undertaking analysis and confirmation.

The Jin-class submarine has a displacement of 9,000 tonnes and carries 12 JL-2 missiles with a range of 8000 km. The first Jin-class submarine was launched in 2004 and is expected to come into service next year. [passage omitted; comments by head of “Macau International Military Association”]

There have been more transfers of senior generals of the PLA air force and navy in recent days; Major General Zhao Zhongxin, air force chief of staff, has been promoted to deputy commander; and Rear Admiral Liao Shining. Deputy chief of staff of the East China Sea Fleet, who had been director of the combat training bureau of the General Staff Department, has been appointed commander of the navy’s Shanghai base.

Zhao Zhongxin was formerly commander of the 19th Air Force Division stationed at Zhengzhou in Henan, and had also been chief of staff of the air force of Nanjing Military Region, in the frontline against Taiwan; in 2004 he was promoted to deputy chief of staff of the Air Force HQ, and to Air Force chief of staff at the end of 2005. He recently visited Sweden and Bulgaria in the capacity of air force deputy commander, together with Jing Zhiyuan, member of the Central Military Commission and commander of Second Artillery. Rear Admiral Liao Shining is a navy man, but he had been director of the combat training bureau of the PLA General Staff Department; in 2005 he was transferred back to the East China Sea Fleet as deputy chief of staff, and in July 2006 was promoted to rear admiral. Recently he swapped posts with Rear Admiral Wang Deding, commander of the Shanghai logistical base.

Taiwan Ministry of Defense spokesman Lu Ssu-tzu would not respond concerning the USS Kitty Hawk and the PLA’s east China military exercise. Taiwan military experts hold the view, however, that the recent PLA exercise “is totally directed at Taiwan.”

General Fu Tai-hsing, former director of the Strategic Institute of Taiwan National Defense University, stated that although US Secretary of Defense Gates’ recent visit to Beijing was grand on the surface, the US side’s private concerns about China’s development of a killer satellite, a space force, and strategic missiles did not receive straight answers, hence the US military is somewhat unhappy with the mainland; major newspapers such as The New York Times and The Washington Post have pointed out that the visit produced no substantive results, with the consequence that the Kitty Hawk’s Hong Kong visit was blocked by the Chinese side.

Fu Tai-hsing said that the recent PLA exercise is the first comprehensive exercise since its shift from mechanization to informatization, and is also the exercise with the largest scale of science and technology transformation; network centralization C4TSR was the focal point of the exercise.

He pointed out that the mobilization of the Nanjing and Guangzhou military regions for the exercise “was totally directed at Taiwan,” and instituting aviation controls was equivalent to revealing news of the exercise to the outside world and played the role of an external deterrent.

See also the following recent photos of slogans from a landing craft base, from a Chinese BBS called Iron and Blood Forum (tiexue.net): 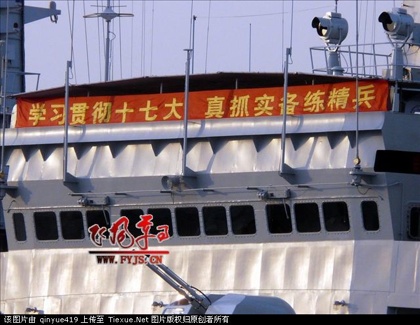 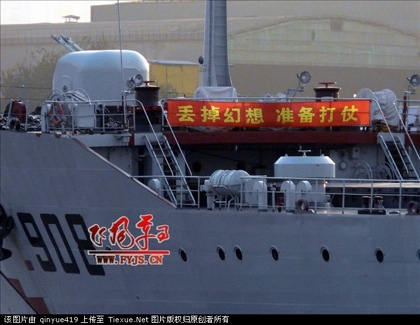 “Throwing Away Illusions, Preparing for War” 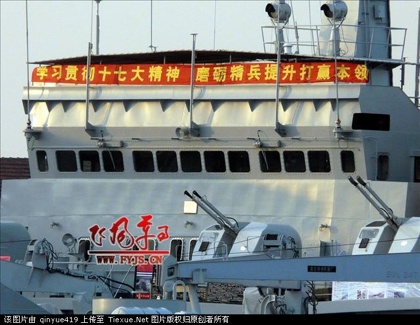 A Bid for Better Military Relations with China