CCTV Gets Wrong Kind of PR – Geoffrey A. Fowler 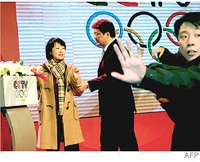 The 2008 Beijing Olympics have become a public-relations vehicle for the Chinese government, corporate sponsors — and now even a betrayed wife.

Since last Friday, hundreds of thousands of Chinese Internet users have watched an online video showing Hu Ziwei, wife of popular sportscaster Zhang Bin, hijacking an Olympics news conference to denounce her husband for infidelity. (Watch the video. Or see a translation of the video dialogue below).

Hu Ziwei, wife of sportscaster Zhang Bin (shown next to her in suit), who denounced her husband for infidelity.

“Just two hours ago I found out that Mr. Zhang Bin is having an illicit relationship with a woman other than me,” said Ms. Hu, after interrupting him on stage during the launch of China Central Television’s Olympics coverage. [Full Text]