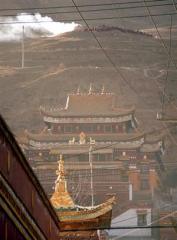 Act of Defiance: In spite of attempts to stop them, Tongren monks still sometimes manage to carry out incense rituals on the mountain near their monastery, from NEWSWEEK.

Jonathan Ansfield writes an on-scene report from a monastery town for NEWSWEEK:

For the Tibetans in Tongren, it was a sacred day of incense burning. But against a backdrop of protest and violence, the big question was whether the monks of the Longwu Monastery could come out to lead the ritual. Tuesday’s occasion, depending on which Tibetans you asked, was either the start of spring or the anniversary of the Supreme Buddha Sakyamuni becoming a monk—or mourning for brethren killed elsewhere during recent clashes with Chinese security forces. To Chinese authorities it presented yet another dangerous window for Tibetans to protest against Chinese rule and clamor for the return of the exiled Dalai Lama.

Armed police were on the alert in this area even before Beijing’s crackdown on the latest spate of protests against its 57-year rule of Tibet left an unknown number of people dead. (China claims that rioters killed 16 civilians in Lhasa, the Tibetan capital; exiled Tibetan leaders estimate that about 100 people have died.) For several weeks in this county seat in Qinghai province, northeast of Tibet, authorities had forbidden the monks to exit their lamasery in groups of more than two, let alone from performing rituals at their hillside altar. On Sunday, though, the monks had ascended the mount before the police could fall in to stop them. They whispered that they might try it again. On Monday night one of the monks called a NEWSWEEK journalist to say the ritual was on. “Seven o’clock tomorrow morning. We’re going up.”

But when dawn broke on Tuesday, the lamas were not moving. Security forces were. Riot police and army trucks walled off all surrounding roads; police blocked the path up the hill, and inside the temple, agents stood guard outside monks’ courtyard living quarters. As the monks grew increasingly agitated over the blockade, the abbot of Longwu pleaded for calm. By afternoon three young monks began turning their rage upon themselves: two chipped at their own scalps and bodies with stones; another slit himself with a knife. “That one [who knifed himself] was my student,” said a senior monk contacted by phone later that day. The other two checked out of a Tongren hospital on Wednesday, but his charge was still recovering. Asked to explain the self-flagellations, the monk said, “People living in this world need freedom. Without freedom, what is the point of living?”