Huge swathes of farmland were destroyed by the earthquake in central China, but the losses should not cause food shortages or big price hikes nationally, a senior official said Saturday.

The devastated province of Sichuan is an important growing region for rice, wheat, corn and other crops, producing 6 percent of China’s grain.

Wei Chao’an, China’s vice minister for agriculture, said the earthquake destroyed more than 75,000 acres of farmland in the province.

“A large amount of farming facilities, including more than 20,000 farm machines, were damaged, Wei said, adding the repair work would be “very difficult”.

He said a few dams and water reservoirs were damaged to “certain extent” and they were releasing water faster than usual.

“I believe these impacted dams and reservoirs will be fixed as soon as possible,” he was quoted as saying by official Xinhua news agency.

Photo: A man who is selling rice in the earthquake zone, Sichuan, from sina.com
. 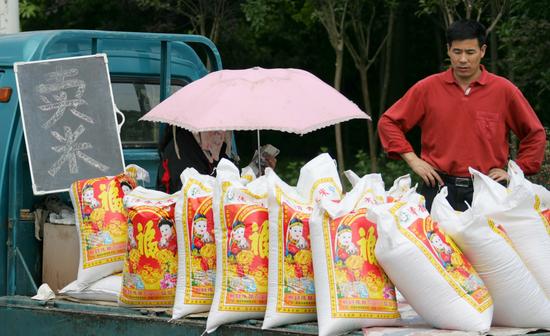