Opinion: In China Diplomacy, Rudd Shows the Way to Go

As diplomats scramble in search of ways to conduct this sort of conversation, a lot of attention is being paid to the speech Kevin Rudd, the new Australian prime minister, gave to students in Beijing two months ago. Mr Rudd famously charmed the Chinese when he addressed President Hu Jintao in Mandarin during his visit to Canberra last year, but he also did his masters thesis on a famous Chinese dissident who was jailed for advocating democracy in the late 1970s.

Mr Rudd used the speech to launch the idea of zhengyou , a seventh-century Chinese word for friendship. “A true friend is one who can be a zhengyou ,” he said, which involves “the ability to engage in a direct, frank and ongoing dialogue about our fundamental interests and future vision.” His Chinese audience lapped it up. All this may sound too clever, as if linguistic sleight-of-hand can somehow overcome deep disagreements. Yet by framing criticism in terms of Chinese tradition, Mr Rudd has established an interesting middle road between the quiet chat that gets ignored and standing on a soapbox to deliver lectures. Other governments are watching with interest. 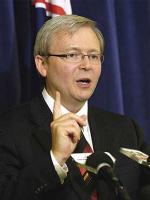 China Now Has the Most Global Diplomatic Posts, Overtaking U.S.

Human Rights Off the Table at E.U.-China Summit